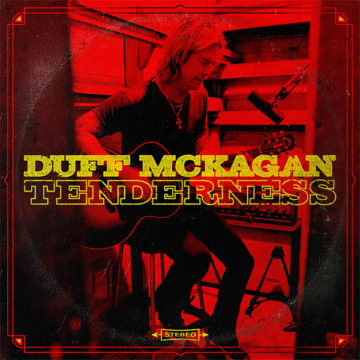 For his first solo album since his 1993 debut (Believe In Me), Duff McKagan has released the highly anticipated Tenderness. Produced by McKagan and Shooter Jennings, the album is a complete left turn from what most likely expected from the bassist of such hard rock titans as Guns N Roses and Velvet Revolver; however it stands as a unique and exciting new musical chapter for McKagan as it showcases a strong, but vastly different side to what we should expect from McKagan as both a songwriter and performer.

The album opens with the title track, “Tenderness”. Released earlier this spring as the initial single, the track trades the expected – ripping guitar solos, thrashing drums, and howling vocals – for acoustic guitars, a gentle piano, and McKagan’s warm, soft vocals. As the slow burning opening track progresses, it grows in lushness to include layered instrumental arrangements and rich vocals harmonies. “Tenderness” is a strong opener that sets the tone for the rest of the record; however, it just may not be for everyone given how drastically different it is from the numerous projects McKagan has been a part of.

If you enjoyed the first song, Tenderness moves forward with seven more songs similar in tone. These songs teeter between contemporary rock ballads (“Wasted Heart”), country (“It’s Not Too Late”), and folk (“Cold Outside”). Among these, the upbeat and sarcastically biting “Chip Away” seamlessly embodies all of these in what is a definite highlight among the album. Perhaps the strongest track, however, is the closing number “Feel” which sounds like it was written to be a second part to “Tenderness”. Much like the opener, “Feel” creates a spacious sonic atmosphere which draws the listener in as it slowly grows in an organic fashion. Between “Tenderness” and “Feel”, Tenderness is bookended by some of its strongest and most ambitious material.

Like any great artistic statement, Tenderness is not for everyone. Despite that, I applaud McKagan for taking such a risk with his work. As a result, Tenderness is a soulful expression for human compassion in times of political and social division. The album delivers on a level comparable to Neil Young and Springsteen while also asserting McKagan as a far more versatile and artistic musician and songwriter that most would have expected. Tenderness embraces, and ultimately revels, in a deep sense of intimacy along with a sense of sophistication, making it a truly welcome addition to McKagan’s diverse and vast discography.

A passion for music has always been a part of Gerrod’s life. As a young boy, he was raised on a steady diet of the music from The Chili Peppers, Aerosmith, The Stones, Prince, and others from his mum. Raised in the GTA, Gerrod continued to foster his love for music by attending a wide range of concerts and learning the drums. His unapologetic passion for music has no bounds and has spread to a wide variety of styles, whether it be the 90’s rock that sound tracked his teenage years, the jazz he studied in university, or his newfound love for hip-hop. He recently received his bachelors in music and education from York University and is passionate about writing and reviewing good (and less than good) music. Gerrod is also the drummer and songwriter for a Toronto based rock & roll band, One In The Chamber.
RELATED ARTICLES
album reviewalbum reviewsguns n' roses
10