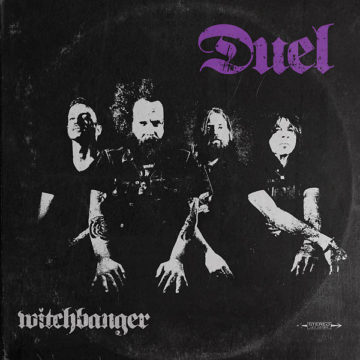 Formed by two ex-members of Scorpion Child in 2015, Duel is gearing up for a busy next couple of months. Witchbanger is the band’s sophomore album which is set to release on April 28th, 2017, almost a year after the release of their debut album Fears of the Dead. The band is also getting ready for a European tour which will have them playing in Italy, Germany, Sweden, and a few others.

Inspired by the heavy rock and metal music of the late 60s and the 70s, the songs on Witchbanger are raging ballads full of face-melting guitars and chest pounding drums. The heavy vocals are raw and intimidating, but in the best of ways. The tracks are brilliantly composed with careful emphasis and crescendoes at key points. Overall, Duel has created some fantastic spell-binding music.

However, while it seems that each track has a distinct sound and rhythm making the songs viable to stand alone. Yet moving through the entire 8 track album is much more rewarding than listening to the songs in isolation. Much like the albums created during the eras that inspire Witchbanger, these tracks work together to create one incredible whole unifying theme. And like the epic metal ballads of those days, the album finishes with a slip into a softer psychedelic rock grand finale that will leave you wanting more. This is something that cannot be fully appreciated unless the album is listened to in its entirety.

Samantha “Sam” Stevens is half a music journalist, and half an academic scholar. With a graduate diploma and MA in Journalism, Sam has covered musicians all over the world and her work has appeared in Guitar Girl magazine, North Bay Nugget newspaper, The Link newspaper, and a few others. She even founded and managed her own music blog The Littlest Voice for 5 years, in which the spotlight was thrown on new and emerging indie artists around the globe. Currently, Sam is a PhD student at Carleton University in the School of Indigenous and Canadian studies where she is continuing her MA research on colonial language in Canadian news and government institutions.
RELATED ARTICLES
album reviews
6.0