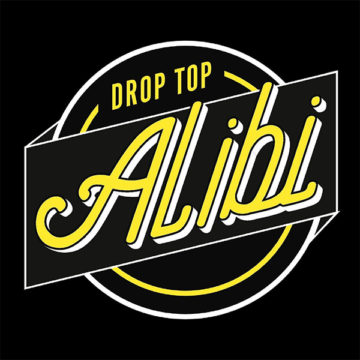 Hot off their recent tour opening for former Guns N’ Roses rhythm guitarist, Gilby Clarke, Drop Top Alibi have released their debut, self-titled album. W. Drop Top Alibi, while only four songs in length, Drop Top Alibi demonstrates the band as having the potential to be among Toronto’s top rock bands with an EP that harkens back to the hard hitting blues rock of the 90’s.

Drop Top Alibi opens with “Burn”, a track that- as the name implies- is nothing short of explosive and features a dueling guitar riff from Dylan Wykes and Brandon Gregory while also allowing for Gregory to truly stretch his vocal range and demonstrate an impressively powerful sound even while pushing his voice to its highest. The song grabs the listener’s attention and immediately pulls them in, leaving them excited for what is to come. One of the biggest spotlights from Drop Top Alibi is “Holding The Gun”, the EP’s lead single that was also produced by Clarke. While “Burn” sounds dark and very much inspired by Guns N’ Roses, such influences take a backseat on “Holding The Gun” which feels far more similar in tone to that of Queen. The track’s chorus is larger than life and features an array of rich vocal harmonies over rhythmic stops and ripping lead guitar lines.

The album’s ballad, “Home” takes a note from ’ 90’s grunge and 2000’s rock bands of the likes of Pearl Jam and Alter Bridge to deliver a song that feels a touch heavy but it’s slower tempo and toned down guitar gives the song a slight ballad feel. While definitely the weakest track of the four, it is by no means anywhere near bad which stands as a testament to just how strong of a band Drop Top Alibi is when they deliver hard hitting rock tunes.  The closing track, “So Forgiving”, is just that: an edgy and heavy track with a chorus that feels like it could very easily take the form of an anthem at every show.

Drop Top Alibi strike gold with a debut EP that is a strong contender for one of the best Toronto- based rock releases for the year. Taking influence from the past four decades of rock, this EP achieves exactly what all regional bands hope to: it will make you want to hear these songs performed live. The only fault I could find with the EP is that it’s four song length felt too short leaving me wishing that the band had more recorded material.  From the gritty blues inspired bangers to the pull no punches rockers, Drop Top Alibi – the band and the EP – is definitely worth checking out for anyone who considers themselves to be a fan of modern rock.

A passion for music has always been a part of Gerrod’s life. As a young boy, he was raised on a steady diet of the music from The Chili Peppers, Aerosmith, The Stones, Prince, and others from his mum. Raised in the GTA, Gerrod continued to foster his love for music by attending a wide range of concerts and learning the drums. His unapologetic passion for music has no bounds and has spread to a wide variety of styles, whether it be the 90’s rock that sound tracked his teenage years, the jazz he studied in university, or his newfound love for hip-hop. He recently received his bachelors in music and education from York University and is passionate about writing and reviewing good (and less than good) music. Gerrod is also the drummer and songwriter for a Toronto based rock & roll band, One In The Chamber.
RELATED ARTICLES
album reviewsdrop top alibi
7.0