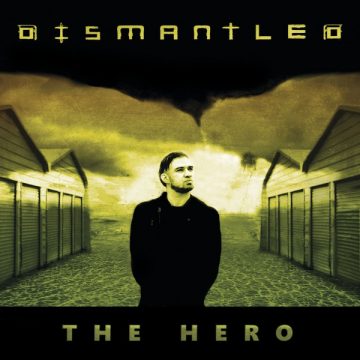 Dismantled’s debut in the limelight was on an illustrious compilation containing names like Front Line Assembly and Seabound. Catching the attention of Dependence Records spoke volumes of its potential early on; after all, this label was a collective of industry heavyweights, from Velvet Acid Christ’s Bryan Erickson to Mr. Ronan SynthPop-incarnate Harris.

Sixteen years later, that potential continues to manifest itself in wonderful new ways. Dismantled is a testament of Gary Zon’s commitment to developing as an artist. His self-titled album in 2002 had a grimy, white-label rhythmic noise vibe that was unforgettable. The distorted and compressed vocals, abrasive mechanical grinding samples, and erratic beats in “On Your Knees” made this track the epitome of dystopian music, a ballad commemorating the globally historical moment of agony and fear. The subsequent Post-Nuclear and Standard Issue albums were a clear evolutionary path for Dismantled – Zon’s vocals got cleaner, the song structure more defined, clear patterns so familiar to EBM listeners emerging from the chaos. By 2007, When I Am Dead took a danceable approach, focusing on lyrics and choral effects, while the last full album released in 2011, The War Inside Me, took a detour into fist-pumping rage-spewing Aggrotech territory akin to FGFC820 and prodigious mentors Suicide Commando.

No two Dismantled albums have been the same.

Zon has sampled the full bouquet of contemporary Industrial species, and he has grown as a musician with his every experiment. Listening to The Hero EP, you can catch a glimpse of every one of these prior chapters working together with an unrivaled symbiosis. It has a club-ready rhythm, a more complex melodic structure with less repetition, eloquent and clearly articulated lyrics, and clever, Pop sci-fi samples – all the hallmarks of a headlining Electronic act.

The raw energy is absolutely there – but it is channeled in more productive ways than ever. Where Dystopia trashed the dressing room with a chainsaw to sample noises, and The War Inside Me screamed incomprehensible rage overtop, this new Dismantled product dials all the crazy down to a manageable level and capitalizes on the top virtues of every trick in Zon’s repertoire. It shows progress without compromise is possible and presents a mature and lucid style that is the crowning achievement of his catalogue.

For any die-hard Dismantled fan, it’s hardly news that Gary Zon rubs elbows with other great artists. His music is ripe for creative interpretations and the remix collection on this EP covers a wide gamut of industrial styles – from the glitchy dubstep-inspired Sleepless Droids version of “The Hero,” to Psyclon Nine taking an Industrial Rock approach and a danceable Rotersand rework. For an electronic ballad, the new version of “Trapped” is also sensational, a revelation into Zon’s vocal prowess that started more than a decade ago with Exit. Passionate and evocative, it perfectly complements the newest metamorphosis in Dismantled’s style.

After a four-year hiatus, however, what we were really anticipating are new, original tracks and these little glimpses into the upcoming full album are very exciting. For fans of the TV series Arrow, The Hero will immediately captivate you with its opening sample and as the title track it really sets the tone for the rest of the EP: well-groomed new-school Industrial with a soft side, that still packs a mean punch. “Suicidal” was by far the favourite track – those hi-hats in the chorus are indelible, a ticking bomb capitalizing on the lyrical tension of the chorus – I can’t remember the last time I kept a track on repeat for that long!

I’m a geeky weirdo with her fingers in all sorts of pies. I paint and illustrate all sorts of nonsense, I make strange noises. I rant and rave, set things on fire, I’m an awesome cook and I throw a mean party.
RELATED ARTICLES
metropolis records
7.0

by Samantha Wu on September 27, 2019
KMFDM Paradise Metropolis Records For the past 35 years, German industrial bandKMFDM have been defying rules of genre constraints and proudly giving the finger to authority. With their 21st studio [...]
6.0