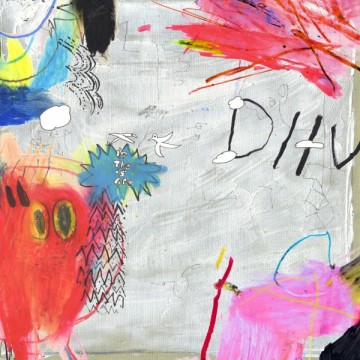 DIIV
Is The Is Are
Captured Tracks

Every time I visit the good doctor for bloodwork, my admiration for the “vagrant junkie” type grows. The metallic barbarism, the ritualized tinkering and tapering, just to feel, in the words of Lou, “like Jesus’ son.” To risk pain and fatal disease, all in pursuit of analgesic pleasure, is a hedonistic triumph. Unfortunate, then, is the destruction inherent to that chase for the golden hum.

When I saw NYC indie shoegazers DIIV perform at Fort York in August of last year, my friend turned to me and remarked on how strung-out they looked. Haggard, weary, sedated, sweaty – the lead singer wore an oversized Garfield t-shirt, possibly to hide his red and purple abscesses. I told my friend it was just an image, that heroin-chic was making a comeback. Turns out I was only half right.

By that time, in late 2015, DIIV had already begun cleansing. Following Zachary Cole Smith’s drug-possession/stolen van arrest in September of 2013, a two week splurge in rehab, and an opium-free ultimatum from his musician-girlfriend Sky Ferreira (who is featured on this album), DIIV were doing the only thing harder than self-injecting: self-reflecting.

The result of this self-reflection was metamorphosis. Is the Is Are (nonsensically pretentious name intentional) shows a complete change in artistic impetus. The strung-out, soothingly reverbed, krautrock-shoegaze tunes from 2011’s Oshin are still here, but Is the Is Are fizzles with a frightening urgency that its lackadaisical predecessor barely considered.

On “Bent (Roi’s Song)” we hear frontman Zachary Cole Smith, on the verge of tears, murmur “I saw you with a very loose grip on your tight ship” – possibly referring to that other famous “Heroin” lyric; you know the one: “I wish that I’d sailed the darkened seas/on a great big clipper ship.” This pain and sense of loss are prevalent throughout the album, which is no surprise; addiction and sorrow have always lived under the same roof.

On the very next track, “Dopamine,” we get “fixing now to mix the white and the brown” and a chorus of “got so high I finally felt like myself.” This is drug music, yes, but not of the John Frusciante, dead on the rocks, cut-my-hair-and-take-me-there variety. This is D.A.R.E (Drug Abuse Resistance Education, for those who never attended). Amidst plonking pianos, scarred guitars and pained vocals is a tender, sincere heart. “Would you give your 81st year for a glimpse of Heaven now and here?” begs Smith. What about your 60th? Your 45th? Your 34th?

When Zachary Cole Smith spent three weeks in his meagre NYC apartment listening to Sonic Youth’s Bad Moon Rising “over and over, out of my fucking mind,” clearly the experience impacted him. The fierce, intangible anarchy of that album is channelled into many songs on Is the Is Are. But DIIV surpass mere homage; tracks like “Mire (Grant’s Song)” and “Incarnate Devil” lie uniquely at the crossroads of post-punk, shoegaze, krautrock and dream pop, which is a new combination for the group.

By the time the 17th track arrives, everything from flexed anger to blue boredom has been expressed. But as a special treat, DIIV save the best track on the album for last. If you thought the heartbreaking tenderness of Oshin’s “you’ll never have a home” couldn’t be matched, try not to spill salty tears over the ghastly optimism on “Waste of Breath.” This is what pathos sounds like.

Is the Is Are is like learning how to ride a bicycle after a terrible accident. How does one regain momentum after spending years in catatonic bliss? Zachary Cole Smith has spoken plenty about this record being his one shot at immortality. Forever is such a long time off, though, and my crystal ball in still in the shop…but I suspect that in twenty years, Is the Is Are will be looked at as a significant transitional moment in DIIV’s hopefully ample discography.

Last year the Centers for Disease Control and Prevention in the United States reported that the rate of heroin-overdose deaths had quadrupled over the past decade. This makes Is the Is Are even more of an anodyne record: it sounds great, and means well. Forget the soporific opiomania of yesteryear’s DIIV, and observe that cocoon of dependence as it sweetly disintegrates.

by Ryan Sagadore on May 5, 2017
Mac DeMarco This Old Dog Captured Tracks Nearly two years since his last release, Mac DeMarco returns with a collection of 13 songs, which may surprise some of his longtime fans. Known to many [...]