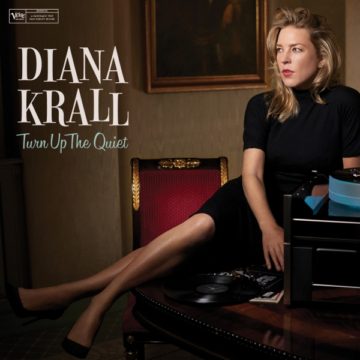 The album provides the perfect backdrop for a quiet night with a repertoire of eleven jazz standards chosen by Krall, who trades in her accomplished piano chops to feature predominantly as a bandleader. Turn Up The Quiet also showcases three distinct bands she selected for the album.

Turn Up The Quiet echoes Krall’s favourite themes of love and hope. Her sultry vocals draw the listener into an intimate space as only Krall can. The microphone is sometimes a little too crisp for my liking, but the arrangements conceived of by Krall and co-produced with Tommy LiPuma (All For You, The Look Of Love, and Live In Paris) flow seamlessly, distracting from this minor glitch. While Turn Up The Quiet is not as standout as her debut, it offers strong production and the mature sophistication of Krall’s evolving musicianship.

“I have thought about these songs for a long time,” Krall shares. “Being in the company of some of my greatest friends in music allowed me to tell these stories just as I’d intended. Sometimes you just have to turn up the quiet to be heard a little better”.

The record was engineered and mixed by Al Schmitt at Capitol Studios in Hollywood, California.

Talia Wooldridge is an avid music lover, composer and ethnomusicologist who contributes artist interviews, live concerts, festivals and album reviews for Spill Magazine. She has written extensively on the intersection of music, personal identity and cultural symbolism with an early focus on Latin American Hip Hop and female Cuban rappers. In her spare time, Talia writes, composes music and manages Music Can Heal, a non-profit that brings live, award-winning musicians to inspire healing in hospitals, hospices and communities in need. Her next project is an interactive music-travelogue exploring music cultures and music travel around the globe. Follow her here: www.taliawooldridge.com + www.movetoyourownbeat.com.
RELATED ARTICLES
album reviewsdiana kralluniversal music
7.0