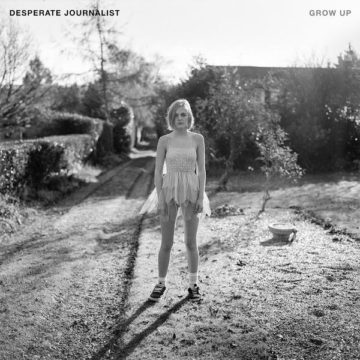 The novelty of Desperate Journalist’s sound, especially on Grow Up, comes from the outstanding vocal talents of Jo Bevan, whom provides a powerful and passionate vocal performance on every track. Bevan’s raw abilities are especially obvious on tracks like “All Over” and “Purple”. Additionally, Simon Drowner’s bass playing ranges from smooth grooves (“Be Kind”, “Purple”) to crunchy goth riffs (“Hollow”). In fact, there are noticeably pronounced bass lines that run throughout most of the album’s tracks, which nicely juxtapose Rob Hardy’s dreamy, Cult-esque guitar performances.

Opening with the epic “Hollow” and closing with a piano ballad (“Radiating”), the album explores an array of lyrical and musical elements. For example, a lyrical motif of emotional hollowness appears at various points throughout the album (“Hollow”, “Oh Nina”). The musical composition of several songs that end in sudden, anti-climactic ways also appropriately accentuates the lyrical themes of frustration and resentment in songs like ”Hollow”, “Resolution”, and “Purple”. Bevan’s lyrics are often presented in a direct, spiteful manner (“Lacking In Your Love”, “Your Genius”, “Why Are You So Boring”, I Try Not To”). Part of the genius of Bevan’s vocal and lyrical combinations though, is that the songs work as a cathartic way of addressing feelings of resentment and frustration without being overly despairing.

Overall, Grow Up is an exemplary post-punk album. Desperate Journalist are quickly establishing themselves as a significant contemporary group with their latest work, and their efforts are sure to be positively received by audiences.

Here's what we think...
Spill Rating
Fan Rating
Rate Here
New Criteria
10
10
8.0
Total Spill Rating
10
Total Fan Rating
You have rated this
Album Reviews
album reviewsdesperate journalistfierce panda recordsgrow uphollowlacking in your lovepurplewhy are you so boring?
album reviews, desperate journalist, fierce panda records, grow up, hollow, lacking in your love, purple, why are you so boring?
About the Author
Ryan Philips

The Spill Magazine is a Toronto-based online publication dedicated to covering the independent music scene with a strong focus on our thriving hometown talent. Our writers bring you up-to-date news, in-depth features on musicians and reviews for the latest CD releases. We also travel to the front lines for all local festivals including Canadian Music Week and North by Northeast. Don’t forget to check out our Facebook and Twitter pages for all daily Spill updates.
RELATED ARTICLES
album reviewshollowpurple
9.0