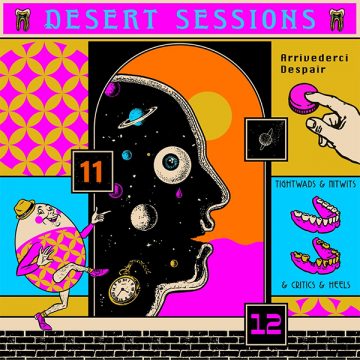 Never one to sit still, Josh Homme has revived his long-time, on-and-off project, The Desert Session for the first time in 16 years with the release of Vol. 11 & 12. Traditionally the most untraditional of super groups, previous Desert Session releases have allowed for Homme to collaborate with a wide array of musicians. The sessions typically take place over a short time period, usually at Rancho De La Luna Studios in Joshua Tree, California.

Think of it as band camp for rockstars. As the press release best illustrates, it is “the most mythical, longest running rock ‘n’ roll mixtape odyssey in existence.” The session includes Billy Gibbons of ZZ Top, Les Claypool of Primus, Stella Mozgawa of War Paint, and Mike Kerr of Royal Blood, among others. With a lineup like this, Vol. 11 & 12 certainly delivers on the promise of a mythical odyssey.

Culminating together with a total of eight tracks, the album opens with “Move Together.” Sung by Gibbons in a soft, soulful, and whispering falsetto, the song grows from intentionally ambient retro-sounding synths and drum machines to a musical explosion that is truly bizarre, rhythmic, and abrasive – the perfect collision of Primus and Queens Of The Stone Age. The track then heads into a mellow jam with layered and weaving guitars.

Homme’s tone especially cuts through the mix like a knife, and remains truly distinct and tasteful. “Noses In Roses, Forever” continues with a funky swagger that only Homme could deliver with his slick vocals, over a tight, offbeat groove and psychedelic tone from the band. Seamlessly they shift gears into a straight-ahead rocker and back again. On the other hand, “If You Run” stands as a definite highlight with an emotional, dark, and haunting acoustic number with Libby Grace on lead vocals.

The latter half of the record continues to push forward without inhibitions with the Ker-led “Crucifire,” a punk rock banger high off its own energy that fits perfectly between the work of Queens of the Stone Age and Royal Blood.

While seemingly straightforward and conventional, Vol. 11 & 12 doubles down on being an oddity on the R&B Bowie-inspired funk of “Chick Tweetz,” and the following loose jam, “Something You Can’t See.” Homme leads the album to a strong close with a winding ballad – almost like a haunted lullaby – on “Easier Said Than Done.” The dark tone of the song greatly resembles the style of his recent work with both Queens of the Stone Age and Iggy Pop; However, it’s stripped-down approach adds to the vibe and tone of the song and allows for his lush vocals to stand alone in an intimate and perhaps even venerable setting.

One of the intentions of the Desert Sessions is an opportunity for a number of artists – many of whom would not get to do so with each other otherwise –to get together to write, record, and, ultimately, experiment. Vol. 11 & 12 truly delivers on this and remains true to the essence of the Desert Sessions.

This is not a commercial record in any way – that simply was never the intention or goal. Rather, Vol. 11 & 12, with its revolving cast of strong musicians, absolutely revels in its own obscurity, quirkiness, and experimental nature. This makes for a truly exciting and entertaining – if not weird as all hell – release that simply has the audacity to be itself.

A passion for music has always been a part of Gerrod’s life. As a young boy, he was raised on a steady diet of the music from The Chili Peppers, Aerosmith, The Stones, Prince, and others from his mum. Raised in the GTA, Gerrod continued to foster his love for music by attending a wide range of concerts and learning the drums. His unapologetic passion for music has no bounds and has spread to a wide variety of styles, whether it be the 90’s rock that sound tracked his teenage years, the jazz he studied in university, or his newfound love for hip-hop. He recently received his bachelors in music and education from York University and is passionate about writing and reviewing good (and less than good) music. Gerrod is also the drummer and songwriter for a Toronto based rock & roll band, One In The Chamber.
RELATED ARTICLES
album reviewalbum reviewsbilly gibbons
8.0