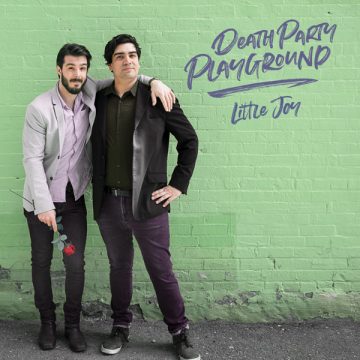 “Sounds like” is probably the most common comment you’ll hear about music. Any music. Expect no exceptions with Kitchener Waterloo, Ontario quartet Death Party Playground and Little Joy, their new and ‘first’ album at the same time. New, since they do have recorded material, and quite a bit of it, released through Bandcamp, but the band’s main man Kyle Taylor considers it their true debut.

So what are Death Party Playground debuting with? No, it doesn’t sound like or have anything to do with death, or any other kind of metal, but it certainly has a sound you can connect DPP to, and that is certainly the late ’80s sound, a blend of Candy Apple Grey, Hüsker Dü, and The Replacements’ “All Shook Down”. You can throw a few other power pop elements in there too.

Is there a problem with the concept of “sounds like”? Not if it sounds good, and it makes you pull the stuff it was inspired by off that dusty shelf it is lying on and give it a few spins.

I don’t know if that was the intent Death Party Playground had here, but that is almost exactly what you get – the reincarnation of an excellent sound. Whether or not the band will ever reach the heights of either Hüsker Dü or The Replacements is another question, but it is certainly a possibility if Little Joy is any indication.