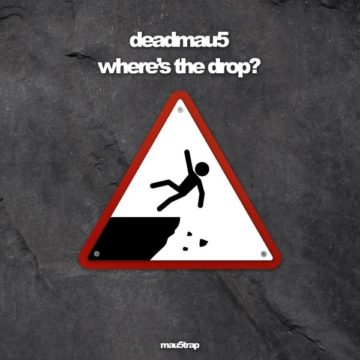 There is something about both the music that deadmau5, aka Joel Zimmerman, makes and the opinionated, and at times combative, persona that he has created that is hard to nail down; he and his music are equally as enigmatic as brilliant. Say what you will about the man, but regardless of all of the hubbub that surrounds him, he is without a doubt a pioneer of EDM and a very talented producer. His approach to where’s the drop? differs to work done in the past in that he has sought out the talents of South African composer Gregory Reveret to re-imagine some of his most famous work and to paint it with the brush of orchestral arrangement. The results are very satisfying and at times mesmerizing.

The one true puzzle to this album is whether or not it would stand on its own were the listener to be unaware of Zimmerman’s impressive back catalogue; where’s the drop? excels in its ability to retell a powerful story and in the exercising of what is possible, but perhaps it does so with such overall affect because the listener is able to experience these songs in their re-imagined form, with the awareness of their change in scale, shape, and mood. This is a question that I personally am unable to answer, but it would be interesting to hear another opinion.

Overall, where’s the drop? is a rewarding listen, regardless of your filter, and in some cases is almost transformative. Deadmau5 is first and foremost a very talented producer and musician with a natural ear for composition and arrangement, and when that is combined with Reveret’s orchestral background, it is no surprise that something powerful is the end result. There is a move towards ambience here, with “coelacanth” the true standout track, and away from the dance-friendly bangers of the past, but this new ground is no less compelling.

Addendum: Deadmau5 has already followed up the release of where’s the drop? with mau5ville, level 1, an album of rarities and remixes originally debuted online via Twitch and PUBG, formats for online gaming for which deadmau5 has a reportedly voracious appetite.

Br. lives in southern Ontario, grew up on The Beatles and The Journeymen, spent his adolescence immersed in grunge, and his adulthood in British alternative. His greatest joy is seeing his son dance and grow into his own appreciation of the indescribable joy of music...
RELATED ARTICLES
album reviewalbum reviewsdeadmau5
7.0