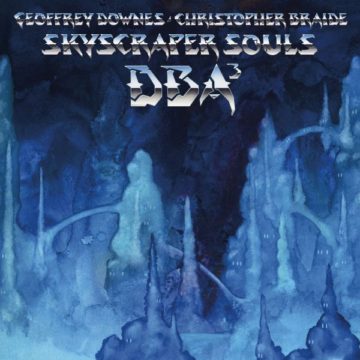 Downes Braide Association ( DBA) are here to teleport you right back to the ’80s with their new album, Skyscraper Souls. As a collaboration between Geoff Downes (The Buggles, Yes, Asia) and Chris Braide (Sia, Beyonce, Marc Almond), Skyscaper Souls is DBA’s third album, with their previous being 2015’s Suburban Ghosts, and is their first on their own label (X2X Records).

As with their first two albums, you never know what to expect from these two artists. On this album, which musically is more prog rock through an ‘80’s filter, they have help from a number of guests including XTC’s Andy Partridge, B-52’s Kate Pierson, Tim Bowness, Big Big Train’s David Longdon, Matthew Koma, and Marc Almond. An impressive and rather eclectic guest list. And yet, due to the writing and excellent production, the album has a very cohesive sound and nice flow to it.

While they are assisted by Ash Soan on drums and Andy Hodge on bass, Downes and Braide anchor the whole project and remain the real stars. Their guests take to the music very well. Andy Partridge sounds great and sounds right at home with DBA, which given his travels into psychedelic music should not come as a surprise. Marc Almond delivers a strong performance with “Skin Deep”, a song tailored made for him. Kate Pierson deserves a great deal of credit for her vocals on the title track and first single “Skyscraper Souls”.

The album has a theme running through it, but is not a concept album. Starting with a prelude and a finale, the lyrics are very strong and encouraging about moving on with your life. The songs are connected by recurring ideas and themes. Again this is quite an accomplishment given the guest stars, Downes and Braide have created a consistent sound. The melodies are strong and at times downright catchy.

Skyscraper Souls is the album that both artists have been building towards. The prog rock and classic rock sound is there via Downes, while Braide throws in more current and pop sounds. The mix works and as a result one gets an unique album.

The album is extremely well mixed and produced. The cover of the album, designed by Roger Dean (famous for his Yes album designs) adds to the whole package and as a result. It is a well made album, flows beautifully and is another welcome addition to both of these musical geniuses’ respective catalogs.

Born and raised in Whitby, Aaron discovered music through his love of The Beatles. This led to a career in radio, writing for various publications, and ultimately a radio show about The Beatles (Beatles Universe), which ran for over four years. When not immersed in music, Aaron enjoys spending time with the loves of his life -- his wife Andrea, and daughters Emily and Linda (all of whom have an intense love of music too).
RELATED ARTICLES
album reviewsasiabeyonce
8.0