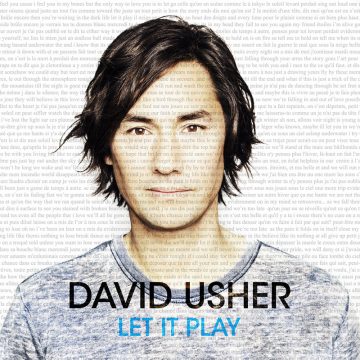 You can listen, Let It Play. It may sound new, exciting and original. However, David Usher’s ninth solo album, Let It Play is a translation, better yet – a revision of a small collection of French songs that he loves for English ears.

It is debatable whether or not the album is original, borrowing many of the tracks and overdubbing the vocals and harmonies. Translation of art is not an original concept either. However, Let It Play still brings together a wider audience by presenting pop hits from Quebec and France to English fans.

“In popular music, language is the great divider,” David said in his press release for his latest album. He also explained that Let It Play is a commentary on English and French culture co-existing while remaining separate.

The title track, “Let It Play” is a translation of “Ne me dis pas” a 2014 pop song by Quebecois artist, Dumas. “Ne me dis pas” is a catchy, pop song and thanks to David Usher, it has been reinterpreted for an English audience.

Among all of the covers, David has also translated his 2001 number one hit single “Black Black Heart” from his Juno Award winning album Morning Orbit, to French. The song remains the same, except for the language. Still, it brings on waves of nostalgia for those who remember the turn of the millennium.

Another notable track from the album is “War Again” which is a revision of the upbeat “L’Amour” by Karim Ouellet. The song is a catchy pop song about falling in and out of love, between the sheets and the lustful psych. The 2013 pop hit has been revived by David Usher in Let It Play.

The album would not have been possible if it were not for the original artists.

“They loved the idea so I immediately started reaching out to other artists. A few thought I was crazy, a few ignored me, but most loved the idea and the risk of experimenting with a linguistic mash-up. These musicians were incredibly open and adventurous to allow me to mess with their art,” said David Usher.

Music is art, melody, rhythm, feeling and voice. In Let It Play, David has mastered the art and voice by translating French hits for English consumption. Though it is not just for the Anglais. It is a bridge or connection allowing English and French fans to enjoy and understand the same songs and stories. Let It Play.

Robert Janes is a journalist and conversationalist from Guelph, ON. He wears his pants with a belt and most likely listens to the same music as your parents.
RELATED ARTICLES
album reviewsdavid ushermoist
10