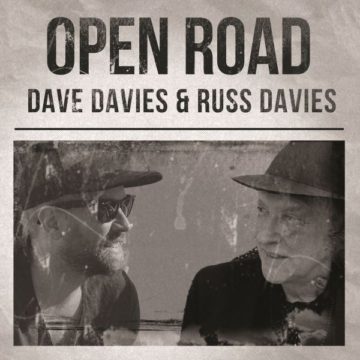 The Kinks called it a day in 1994, following the release of their much overlooked, but brilliant, album To The Bone. Who would have predicted that Dave Davies, co-founder and the revolutionary guitarist for the band, would be the more prolific of the two. Ray Davies (older brother and co-founder) was known as the main writer. I think all bets were on Ray to produce more solo albums. However, sInce the split, Ray has released four studio albums (his fifth is due later this month), while Dave has released 12 studio albums (plus three while with the Kinks). Through his website he has also issued a number of live albums. This release, his third is with his son, Russ, titled Open Road, could be his finest solo album yet.

Dave and Russ’s first two albums are more ambient and spiritual, and while interesting, were not the most accessible records in the Davies catalogue. Open Road, however, is much more conventional, and brings Dave back to his acoustic sound. He does not forgo the electric, but he does some nice work with his acoustic guitar. Although Dave has never been known for his singing voice, on this album his weariness and the years of experience in his voice accentuate the music and overall theme of the record.

Russ Davies is not a newcomer to music. Whether known as Russell Davies, or as a member of Abakus or Cinnamon Chasers, he has been producing and remixing music for over fifteen years. He is known mostly for electronic music or deejaying (he remixed a number of Roxy Music tracks for the clubs, with great success), but here he also plays guitar. He lets his dad do what Dave does best, and he plays loud guitar and lets the music grow around it. Yes there is a lot of acoustic throughout, but there is also his trademark gritty electric playing. Russ Davies is a brilliant producer, and if he can get this quality of writing and playing from his dad, they should continue to work together.

Here Dave sings lead vocals. For the most part, he sings about the past and the future. The theme of the album seems to be looking back and wondering what is ahead. The first three songs set the tone — “Path Is Long”, “Open Road”, and finally “I Don’t Want To Grow Up”. Dave’s voice fits the tone beautifully.

This is an album in every sense of the word. The songs are sequenced to set the mood, and it is clearly a concept album about getting older and the fragility of life — you may remember Dave’s health scare in 2004 when he suffered a stroke. The fact that Dave continues to play, write, and perform after such a health setback speaks to his dedication to his art and music.

This is a terrific album. It may not earn new fans, but it should. By rights ‘classic rock radio’ should be all over this album. Fans of Davies’ solo work and The Kinks will enjoy what he has produced here.

Born and raised in Whitby, Aaron discovered music through his love of The Beatles. This led to a career in radio, writing for various publications, and ultimately a radio show about The Beatles (Beatles Universe), which ran for over four years. When not immersed in music, Aaron enjoys spending time with the loves of his life -- his wife Andrea, and daughters Emily and Linda (all of whom have an intense love of music too).
RELATED ARTICLES
album reviewsslow downsony music
6.0