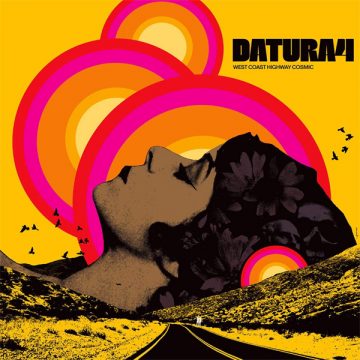 Although the world is in lockdown, and things are not looking up, Datura4 has released, what I consider to be, the first true great summer album. West Coast Highway Cosmic is the perfect album to get out on the road, roll the windows down, and coast through the countryside with this blaring in your car. A convertible is preferred but not essential. West Coast Highway Cosmic is straight ahead, smart rock. Pure and simple.

The album is the result of the band travelling through Australia between two studios. The distance seemed to provide the band with inspiration and the attitude to record this gritty rock album — just listen to the harmonica solo in “You Be The Fool”, courtesy guest Howie Smallman. With West Coast Highway Cosmic, the band has one foot in classic rock and one foot in today’s sound.

For West Coast Highway Cosmic, the band’s fourth album, they continue to progress and become more confident in their playing and sound. The band consists of Dom Mariani (guitar and vocals), Warren Hall (drums), Stu Loasby (bass) and new recruit Bob Patient (keyboards) who adds a wonderful Hammond Organ to the mix. The sound they make is not so much retro as tapping into the great sounds of yesterday. These guys like to rock.

Overall, it is a strong album with a number of standout tracks. “Evil People Part 1”, “Rule My World” and the opening and title track “West Coast Highway Cosmic” with that wonderful organ introduction, all come to mind as tracks that demand your attention. The album is well-produced and the songs are sequenced very well. It is heavy, without the noise, and holds you captive throughout.

West Coast Highway Cosmic is a great album from beginning to end. It should be the perfect soundtrack to your summer. And the good Lord willing, this band will be on the road soon, as I can only imagine how great they would be live.

Born and raised in Whitby, Aaron discovered music through his love of The Beatles. This led to a career in radio, writing for various publications, and ultimately a radio show about The Beatles (Beatles Universe), which ran for over four years. When not immersed in music, Aaron enjoys spending time with the loves of his life -- his wife Andrea, and daughters Emily and Linda (all of whom have an intense love of music too).
RELATED ARTICLES
album reviewalbum reviewsalive naturalsound records
8.0