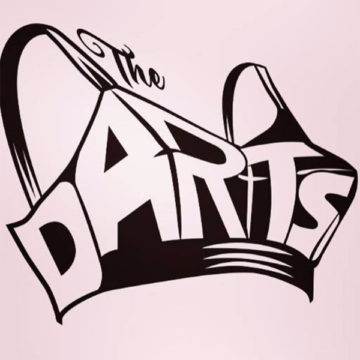 First, let us be clear, this is NOT the nine piece doo-wop band who were huge in the UK in the late 1970’s. That was Darts, there is no ‘the’. The Darts are the polar opposite.

This is a four piece band from Arizona and Southern California and they rock. They rock hard. The women in this band have been through their paces in several other bands over the past few years, but in 2016 they formed The Darts. After releasing a couple of EPs, they are ready to unleash their brand of lo-fi rock n’ roll into the unsuspecting world, on this, their debut album.

This is a tight group with sonic noise coming at you, with strong, somewhat compressed vocals that put the icing on the cake. It is good. Nicole Laurenne’s vocals are unique, strong, and bring the album to life.

Listening to the album, it is hard to believe that it was recorded by members in two different cities (two in Arizona and two in Southern California). The producer assembled this album to create the feeling of a four piece band playing live off of the floor in one room. It is full of what the great John Cale would call “dirty ass rock n’ roll”.

The songs are short, well crafted, and blast out of the speakers at you.

Christina Nunez (bass/vocals) and Nicole Laurenne (vocals/organ) wrote the songs, and although this is a rock n’ roll album, there are some interesting sounds within that genre. “Kiss of Fire” is a searing, heavy song that would not be out of place on a strong Siouxise and The Banshees album. But that is the main downfall of the album; there is not enough of variety to maintain an entire album.

These four women are well acquainted with garage rock and the history of rock, and this comes out through their music. Their years of being in different bands means they are each able to bring something to the table for us to dine on. Caution, this is not for the faint of heart, and better suited for a Friday night.

Born and raised in Whitby, Aaron discovered music through his love of The Beatles. This led to a career in radio, writing for various publications, and ultimately a radio show about The Beatles (Beatles Universe), which ran for over four years. When not immersed in music, Aaron enjoys spending time with the loves of his life -- his wife Andrea, and daughters Emily and Linda (all of whom have an intense love of music too).
RELATED ARTICLES
album reviewsdirty water recordsshe's gone
8.0