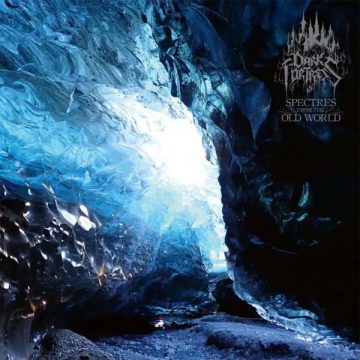 Black metal is a genre far too overdone, however German veterans Dark Fortress understand that making a good record doesn’t need to reinvent the wheel, just push it further. This is made evident by their latest album, Spectres from the Old World.

Six years after Venereal Dawn, Spectres is said to follow in its conceptual footsteps. The overarching cosmic themes of the album work surprisingly well with the chilly atmosphere that is synonymous to the genre at this point.

Opting for a diverse showcase of stylistic choices, Spectres from the Old World is an establishment of Dark Fortress’s unquestionable legacy, a firm foot grounded as a staunch reminder that they’re still on the top of their game. Tracks like “Spectres from the Old World” and “Pulling At Threads” pick up the pace to a fiery frostbite, while “Isa” and “Coalescence” showcase drummer Seraph’s sheer proficiency with tasteful rhythmic variations.

However, to assume that the album would fall short of melodic proficiency is in itself barely short of a crime. From ambient riffs across the record to the prog leads in “Swan Song,” and sheerly epic solos, to headbang-inducing power-chord and tremolo work, V. Santura and Asvargr let us know they can do it all.

Morean’s vocals choose clarity over the anguished shrieks that, while enjoyable, always manage to appear on one too many releases each year. This is a welcome choice, as the well-written, thoughtful lyrics beautifully complement the musical narrative across Spectres. The vocals have a mechanical quality that contrasts not only the words but the often orchestral, grand musings of Phenex’s keys, along with the guitars.

Spectres from the Old World is an album that rewards the listener with every further replay, dragging us further into the cosmic abyss. Dark Fortress haven’t left in the least and, judging by this excellent release, they’re here to stay for quite a while.

Stan is a metalhead, musician, and freelance writer (for hire!) In that order. Yes, looks are deceiving. No, metal is not (all) about Satan.
RELATED ARTICLES
album reviewalbum reviews
9.0