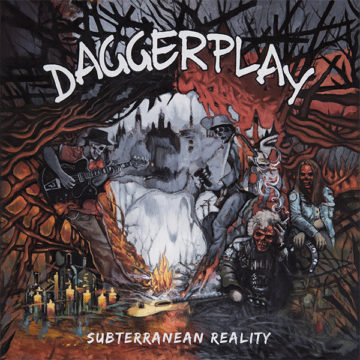 Subterranean Reality is the newest release from Finland’s pop punk heroes Daggerplay, and one can only imagine that it was every bit as fun to record as it is to listen to. Imagine the Pogues meets the Pixies with guest appearances from the Clash and Reverend Horton Heat.  Ska beats dominate the rollicking tempo throughout the album, which is Daggerplay’s second.

The album opens with “Red Sky”, an instrumental tribute to retro guitars and cult movie car chase scenes. Although it’s a standout from the rest of the album, it also manages to set the stage for the remaining 13 tracks. “Days Like These” is power chord driven, and upbeat enough to get anyone paying attention to sing along. Meanwhile, “Four Walls” is the only track devoted to expressing angst in a way that feels something other than optimistic.

“Killburn Highroad”, together with “Same Old, Same Old”, put the Irish drinking song vibe front and center. The two songs are nestled smack dab in the middle of the album and don’t sound out of place at all, despite having a distinctly different sound. The closing song “Sinister Blues” is aptly named.  It starts off with a sleepy swinging beat before abruptly charging into a blissfully chaotic, guitar driven anthem.

Subterranean Reality is a punk album that is likely to win the hearts of punk fans of every subgenre and convert a few pop fans in the process.

Mariko is a freelance writer and photographer based out of Vancouver, BC. She is a music junkie, an intrepid optimist and a fish taco enthusiast. She lives in a campervan full time and is dedicated to exploring the connection humans have with music and sound via her personal blog Earthly Pursuits. When she’s not at a concert or stuffing her face with fish tacos you can find her outside either near water or in the mountains.
RELATED ARTICLES
album reviewalbum reviewsghosts
7.0