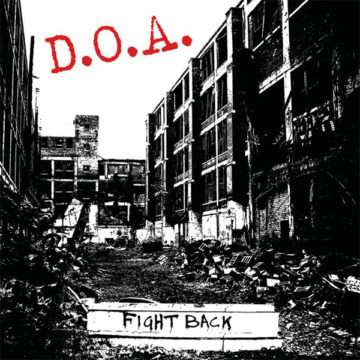 It’s always interesting to observe bands that have the staying power to endure through many decades, and D.O.A. is one of those bands. They have been able to create consistent, memorable works within their oeuvre, despite personnel changes over the years.

Other bands of D.O.A.’s vintage achieve “icon” status simply by sticking around. The common trend is for bands of this type is to regroup after a break, come back with a new album, and mount a tour, in an attempt to re-capture some of their original mojo. These new recordings are rarely memorable, acting only as sonic business cards, to remind us that the bands still exist.

While they are mature, and have certainly attained “icon” status, they’re as incensed with the problems of the world as they’ve always been. They have no interest in phoning it in.

D.O.A.’s 40th anniversary offering, Fight Back, is as strong a collection as we’ve ever heard from Joe Keithley and company. From the opening strains of the traditional punk-styled “You Need An Ass-Kickin’ Right Now”, the die is cast. Throughout this album, D.O.A. shines a light on the ills of modern society with the same energetic, honest, true-punk-DIY integrity that they have demonstrated since the late 1970s.

Musically, this album will appeal to lovers of punk and hardcore, though many of the songs share artistic and spiritual qualities with artists such as Woody Guthrie and Johnny Cash. The songs are showcased well, with Keithley’s guitar and vocal work solidly supported by band members Paddy Duddy on drums, and Mike “Corkscrew” Hodsall on bass.

As D.O.A. tackles the issues that are on the minds of many, the song titles speak for themselves. From the role of law enforcement (“Killer Cops”), to the need for change (“Time To Fight Back”), to the loss of personal freedom (“State Control”), this album is protest music at its best. But it’s not simply protest for its own sake, it’s a call to action. To quote the band’s slogan, “Talk Minus Action Equals Zero.”

Much in the same way that bands like The Clash encouraged their fans to work to address societal woes, D.O.A. has always been (and continues to be) a strong proponent for progressive change. On Fight Back, the songs are strong and the message is clear.

Musician, writer, and grandad Bryan Williston is a fan of music in all of its forms. He loves to listen to, play, and talk about music, and to share his ideas with others. Despite the failings of humans, he is hopeful about the future, and thinks that Spill Magazine readers are just the best. Bryan lives in Whitby with an assortment of people and dogs.
RELATED ARTICLES
album reviewsD.O.A.donald trump
8.0