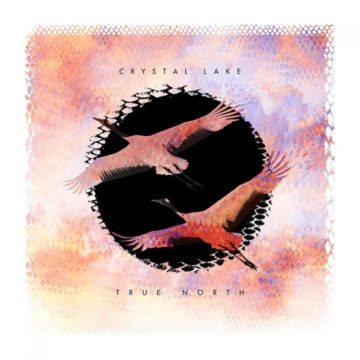 The metalcore ebb and flow of Crystal Lake…

Tokyo’s hardcore/metalcore 4-piece band Crystal Lake has been around for longer than most people realize. They’ve been around since 2002, with Ryo Kinoshita (joining in 2012 on vocals), Yudai Miyamoto (guitar), Shinya Hori (guitar) and Gaku Taura (drums) forming the current incarnation of the group. Peeling away the layers of the album, True North welcomes us with 10 tracks, clocking in at around 35 minutes. On this album, you’ll find that Crystal Lake adds some contrast within their hardcore tracks, thus adding another layer to their evolving sound.

The release starts us off with a subtle and suspenseful opening in “Alpha”, a Kinoshita throaty vocals short track. This ambient novella only lasts for 1:53.I wasn’t sure what they were going for here, at the opening of the album. It didn’t grab me, or amp me up. I had the same feeling echo again on track 9 with “Walk on Water”. Its repetitive guitar instrumental lasted for only 1:35. I’m guessing that these soft instrumental tidbits were to balance the more aggressive sound of the other tracks. “Omega” has a great opening as Taura brings energy on the drums. I felt this song would have been a better lead offering, as it envelops you with its mesmerizing bridge, as an ethereal synth female voice floats around the instrumentals (similarly heard again during the song “Metro”). At the opposite end of the spectrum, we get “Breathe Deep”, which is probably the calmest song on the album, with a soft opening and Ryo’s gentle vocal style. The final track, “Waves”, brings us back to the screaming vocals over calm guitar chords as Miyamoto and Hori jump into an energetic guitar power riff. Some vocals are slightly electronically altered, which is a departure from the vocal norms/range of the album.

In retrospect, I found a fair amount of tracks instrumentally/vocally to be in a similar vein of Alexisonfire (“Metro” and “True North”), which is not necessarily a bad thing. On the flip side, one can truly enjoy Taura’s frenetic pace of the drums throughout the album, as well as the cacophonous onslaught of guitar riffs (especially “Hatred” and “Waves”) that teeter on slow paced chugging to blast driven shredding. Some would say that Kinoshita’s raw vocals don’t stick out from other metal core band leaders growling or screaming, but the energy of his vocals (listen to the end of “Six Feet Under”) tie the songs together well and add another layer to Crystal Lake’s wall of sound. Ryo also shows his adept range from growling, to singing, to calm rapping on different tracks. I enjoyed the vocal juxtaposition of Ryo and guest star Jesse (from nu metal punk band Rize) on “Black and Blue”, as we hear a balance between energetic (the former) and calm (the latter) voices. As a whole, I’m still not sold on the overall lyrical storytelling of this album; it has the pieces, but I was having trouble trying to finish putting the puzzle together.

I’m by no means a technical expert in heavy metal / hardcore genre, but with the cohesiveness and slight variety in pace of the tracks on this album, Crystal Lake delivers an enjoyable listening experience to those who embrace the genre, while continuing to stretch new ideas sonically, without abandoning their underlying musical ethos.

Insert pretentious stuff about me here. I was born at a very young age. I am pretty, funny... without the comma. Easily distracte
RELATED ARTICLES
album reviewstrue north
8.0