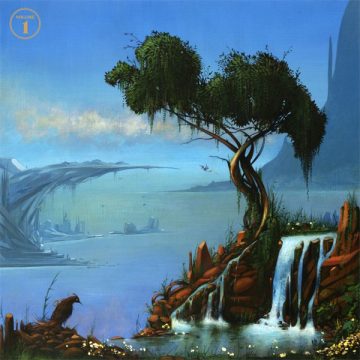 Despite the electrifying and driving rock pulse of their recent singles “Howlin’ Back” and “Spit It Out”, Canada’s most promising up and coming rock band, Crown Lands, has returned with Wayward Flyers Vol. 1. The mainly acoustic EP is their first collection of new music since 2007’s acclaimed Rise Over Run and takes the duo in a folky, rootsy, and soulful musical direction.

Opening with an acoustic rendition of their most recent single, “Howlin’ Back Again”, Crown Lands’ return is marked with a fresh take on a now familiar track. The acoustic slide guitar, performed by Kevin Comeau, is as equally haunting as it is bluesy as it lays the foundation–along with some light percussion–for Cody Bowles’ vocals to truly soar in a manner that can only be described as emancipating. “Howling Back Again” is a stunning example of Crown Land’s ability to adapt their music into a completely different context while still managing to pump a new sense of life and creative energy into the music.

Wayward Flyers Vol. 1 follows this grand opening with a surprise left turn. Rather than an MTV Live and Unplugged approach to this stripped down EP, Crown Lands have taken the chance to dig deep into a rich layer of inspiration that takes shape in a classic folk sound. From the brilliant Neil Young cover, “Birds” to the Jeff Buckley nostalgic closing ballad, “No Sympathy” of the acoustic folk rock of Zeppelin on “Roving On”, Wayward Flyers Vol. 1 is a versatile acoustic record. Perhaps, however, no song is as strong as “The Witching Hour”, a dark and brooding track that is matched, quite juxtaposingly, by its artistic beauty.

It’s no surprise that, once again, Crown Lands have struck gold with their latest release, Wayward Flyers Vol. 1. The album provides the rock duo to the opportunity to branch out with their songwriting and performing in a manner that exceeds expectations of any typical acoustic album. Tracks like “Howling Back Again”, and especially “The Witching Hour” and “No Sympathy”, are truly incredible and stand apart from Crown Lands’ previously-released material. While fans will anxiously await their electric rock return that previous singles have hinted at, Wayward Flyers Vol. 1 will leave you equally excited for a potential volume of upcoming acoustic work from Crown Lands.

A passion for music has always been a part of Gerrod’s life. As a young boy, he was raised on a steady diet of the music from The Chili Peppers, Aerosmith, The Stones, Prince, and others from his mum. Raised in the GTA, Gerrod continued to foster his love for music by attending a wide range of concerts and learning the drums. His unapologetic passion for music has no bounds and has spread to a wide variety of styles, whether it be the 90’s rock that sound tracked his teenage years, the jazz he studied in university, or his newfound love for hip-hop. He recently received his bachelors in music and education from York University and is passionate about writing and reviewing good (and less than good) music. Gerrod is also the drummer and songwriter for a Toronto based rock & roll band, One In The Chamber.
RELATED ARTICLES
album reviewalbum reviewscrown lands
7.0