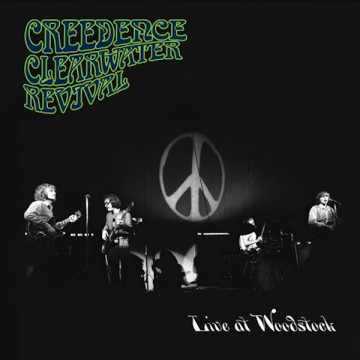 As the 50th anniversary of the era-defining Woodstock Festival approaches, a handful of artists remain attached to pop culture’s memory of the event – Crosby, Stills, Nash & Young, The Who, Joe Cocker, Santana, and of course Jimi Hendrix. Creedence Clearwater Revival, despite its innovative yet short-lived arc, is not one of them. Part of this is due to their late set time and their refusal to be a part of 1970’s Woodstock documentary and soundtrack. All that, however, is about to change with the release of Live At Woodstock, a live album which documents their full 1969 performance, being released for the first time ever.

Opening with “Born On The Bayou”, Creedence Clearwater Revival gets off to a strong start on Live At Woodstock. Following an emcee’s introduction which probably could not be any less enthusiastic, the band establishes themselves with a level of professionalism through a tight performance that pulls the listener in immediately. John Fogerty’s vocals cut through the fuzzy and dissonant riffs with a rasp that is equally as nostalgic as it is powerful. Naturally, their 11–song set would include classics such as “Green River”, “Bad Moon Rising”, “Proud Mary”, and “Suzie Q”, each performed with a sense of engagement, excitement, and conviction.

Among the numbers in their set which flows naturally without a hitch, comes a particular highlight that stands out from the rest of the album. The band’s cover of Screamin’ Jay Hawkins’ 1956 hit, “I’ll Put A Spell On You”, is a definite showstopper. With its haunting melody, rhythms, and chord progressions, Fogerty makes the track his own with a flawless performance that is topped only by his jaw–dropping guitar solo – one which was bound to be one of the greatest performed that weekend. The solo is simply thrilling, and oozing with an edge of style, taste, and raw energy. Truly, “I’ll Put A Spell On You” is performance I simply cannot praise enough and this live rendition surpass any and all expectations.

It comes as no surprise that Live At Woodstock is a stellar live album. Not only is Creedence Clearwater Revival among one of the greatest bands to emerge from the first wave of classic rock, but it is certainly in the top tier of artists to have taken the stage at Woodstock. Furthermore, the album stands as a time capsule of the time, unopened and unheard until now. It’s exciting to hear Creedence Clearwater Revival at such a pivotal moment in not only its career, but in cultural history; however, even without the fanfare and nostalgia for Woodstock, Live At Woodstock still stands as a very strong live record, effectively capturing a band synonymous with sound tracking the growing counterculture among Nixon’s America at perhaps their peak. Why it took half a century – just two weeks shy from the actual anniversary weekend – we’ll likely never fully understand, but Live At Woodstock is an essential addition to any classic rock fan’s library.

A passion for music has always been a part of Gerrod’s life. As a young boy, he was raised on a steady diet of the music from The Chili Peppers, Aerosmith, The Stones, Prince, and others from his mum. Raised in the GTA, Gerrod continued to foster his love for music by attending a wide range of concerts and learning the drums. His unapologetic passion for music has no bounds and has spread to a wide variety of styles, whether it be the 90’s rock that sound tracked his teenage years, the jazz he studied in university, or his newfound love for hip-hop. He recently received his bachelors in music and education from York University and is passionate about writing and reviewing good (and less than good) music. Gerrod is also the drummer and songwriter for a Toronto based rock & roll band, One In The Chamber.
RELATED ARTICLES
album reviewalbum reviewscraft recordings
8.0