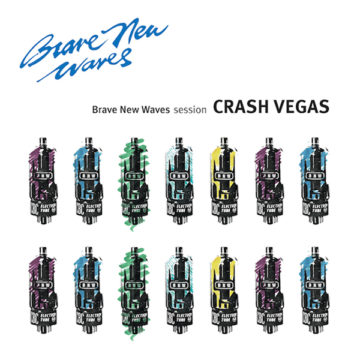 The clubs of Toronto’s Queen Street West were a hotbed of folk, rock, and country music fusion in the late 1980s and early 1990s. Springing from that scene,  Crash Vegas – founded by Michelle McAdorey, and Greg Keelor of Blue Rodeo – was a standout. Crash Vegas was known for its rootsy sound which featured variously jangly and atmospheric guitars, which complemented McAdorey’s hauntingly wistful vocals.

At first listen, one is struck by the immediacy of the recording. As well-constructed as the songs on Red Earth were, there’s a vibrancy of sound that exists on Brave New Waves Session, that is not as obvious on the original album release. As a testament to the musicianship in this band, the sound on Brave New Waves Session is clean, the energy is high, and the performances are bright.

Crash Vegas gives faithful re-creations of the Red Earth tracks “Bury Her” and “Moving Too Fast”, but the song “Julia Rain” varies the most from its original form. With an expanded intro and an extended middle solo, “Julia Rain” pushes forward, epic and dirge-like, the rhythm section pulsing, and the guitar taking the song to its dramatic conclusion. It’s easy to imagine “Julia Rain” being presented this way in Crash Vegas’ live show.

The other two songs on Brave New Waves Session, “Sins of the Family” and “Land of Plenty” – a straight-up country rocker and a jangly melodic folk-pop song, respectively – are welcome additions to this collection. Together, they represent the rich musical diversity of Crash Vegas.

Brave New Waves Session is like a time capsule document, a sonic snapshot of a great band. Can we look forward to a new release from Crash Vegas? Fans can certainly hope, but for now they’ve got a little glimpse of past brilliance.

Bryan Williston has been involved in music since he was a young child. A veteran singer, songwriter, and music educator, Bryan has enjoyed playing a multitude of musical genres in a variety of outfits, over the years. Bryan lives in Whitby, Ontario.
RELATED ARTICLES
album reviewalbum reviewsartoffact
8.0