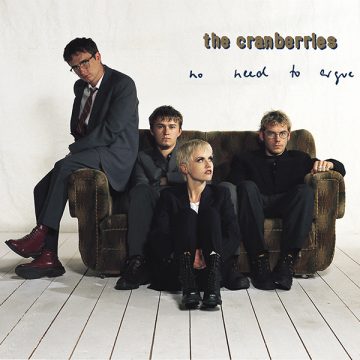 Irish alt-rock group The Cranberries have released a reissue of their second album, No Need To Argue. Along with various B-sides, demos, and live tracks, it features remastered versions of 1994’s songs, including the band’s most well-known hit, “Zombie”.

Among the impressive 36 songs are 19 previously unreleased tracks that include a recording of “Yesterday’s Gone” from MTV Unplugged and a cover of The Carpenter’s “(They Long To Be) Close To You”. Also present are two versions of the fan-favourite dark lament “So Cold In Ireland”, which was previously only available as a B-side on select versions of the original album.

Amidst the band’s characteristic high-quality fare is a strange reimagining of “Zombie” – with heavy beats, distortion, and looping lyrics known as the Camel’s Hump Mix. Most enticing are the Magic Shop demos which offer earlier, slightly different versions of five final tracks. “Empty” features the use of piano instead of strings, while “Ridiculous Thoughts” is a much slower rendition.

The live tracks offered here were recorded at both the Royal Court Theatre in Liverpool and Milton Keynes National Bowl. “Dreaming My Dreams”, especially, has the quality of the studio version. A striking version of title track “No Need To Argue” highlights O’Riordan’s Irish lilt with the help of her acoustic guitar.

With the tragic passing of O’Riordan in 2018 still raw in the hearts of fans, the listening experience is an emotional one. The collection is a worthy homage by the band to the late singer and confirms the longevity of The Cranberries’ legacy.