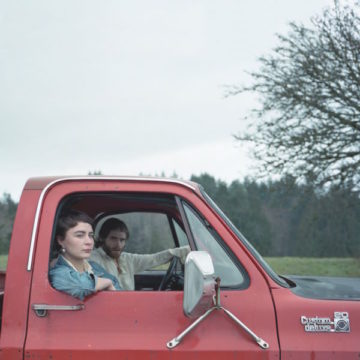 “Way out west,” to quote Big Star, they love to “roll & tumble” with their country rock. And Olympia, Washington quartet The County Liners with their five-song EP Mary Jane Dunphe & Chris McDonnell In tTe County Liners do just that.

Although Olympia might be K Records country, the connection with The County Liners is with rock. And this quartet certainly knows its way around both genres – country and rock. As you may expect from the title, the main contributors are Mary Jane Daphne and Chris McDonnell, who are long time collaborators. The songs on this album arose when they were confined to Mary’s bedroom as she was on bedrest due to an ankle injury. They were also joined by Riley Kendig and Mirce Popovic who contributed to the creation of this EP.

What we get is a very charming, honest set of songs, inspired by The Rolling Stones Let it Bleed/Exile on Main Street period, filtered through the eighties/nineties country rock revival bands like Green On Red and Rank & File. The introductory duo of songs “Love Letter” and “Walkin’ Out” are quite impressive with their rocking pace. “Love Letter” contains lyrics written by McDonell’s mother, Virginia Maurer. “Maria” holds an additional element of charm in its obvious bedroom production. “The County Line” adds a fifties ballad taste, and the closer “Oklahoma” tries to stay true to its title – with a spaghetti western atmosphere and dual vocal lines.

This is a very confident and musically intriguing EP, and I’m begging for more. Country rock lovers should keep their radars tuned to these guys.

Formerly a lot of things, including a journalist and a translator, currently a freelance writer living in The Netherlands.
RELATED ARTICLES
album reviews
6.0