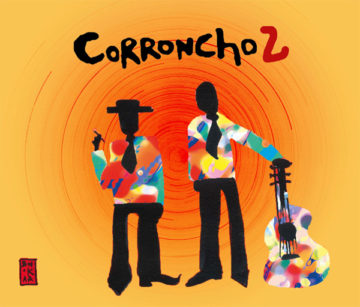 Corroncho is made up of artists Lucho Brieva and Phil Manzanera of Roxy Music fame. But Manzanera is much more than just Roxy Music. Over the past four decades, he has produced a huge catalog of solo music as Phil Manzanera, The Explorers, 801, Henry Fool, Mainstream, Pink Floyd, David Gilmour, and Corroncho. Corroncho is a band based in Columbia and incorporates Latin music through a prog-rock/modern music slant.

Manzanera is no stranger to this music. He spent a great deal of his youth in Cuba and this is where he first picked up a guitar at the young age of six. He has performed in Cuba with Moncada (Live at The Karl Marx,Havava 1992) and formed 801 Latino, which toured South America (801 Latino, 2002).

But this is a little different; this band has now produced two albums and seems to be a project for which he has great fondness. Both albums are well crafted, well recorded and extremely well produced and arranged. 2 features some old friends helping out (Becky Gilhespie and Robert Wyatt) along with new musical friends from Columbia (the name, Corroncho, roughly translated means ‘working class’). For the record, the entire album is in Spanish (as was the first).  Manzanera even covers Leonard Cohen’s “Hallelujah” (here titled “Aleluva”) and Oasis’s “Live Forever” (“Parasiempre”, which gives the original version a run for its money).

The album is a concept album; two friends have a vision and decide it is a sign to drive north to ‘the promised land’, which is Queen’s, New York. This album is their journey and their discoveries during the trip. Given today’s political climate in the United States, it is a timely album and one that reflects how the U.S. is a dream, but that dream does not translate to reality. The last track, “Volvi” (means ‘The Return”) features beautiful trumpet playing from Wyatt; it sets the mood and is a beautiful way to wrap up their journey.

The music is expertly played, but it is not all-traditional South American. Yes, the influences are felt and heard throughout, but this being Manzanera, he has a great many tricks and use of sound up his sleeve.  Lots of effects mixed throughout, and the second track, “Arepa”  (which is a very popular Columbian food) must be heard to be appreciated (a conversation between the two friends as they begin their journey).

This is an album that will grow on the listener with each listen. It is a project for which Manzanera has a great deal of affection, and a project for which he should be very proud.  Both Corroncho albums are great and this album is a brilliant continuation from the first, I sincerely hope there is a third. This album, and project is not something one would expect from Manzanera at this stage in his career. Let’s face it: he could be resting on his laurels, but he continues to explore music, himself and life. Let’s hope he never stops exploring.

Born and raised in Whitby, Aaron discovered music through his love of The Beatles. This led to a career in radio, writing for various publications, and ultimately a radio show about The Beatles (Beatles Universe), which ran for over four years. When not immersed in music, Aaron enjoys spending time with the loves of his life -- his wife Andrea, and daughters Emily and Linda (all of whom have an intense love of music too).
RELATED ARTICLES
album reviewsexpression recordsphil manzanera
10