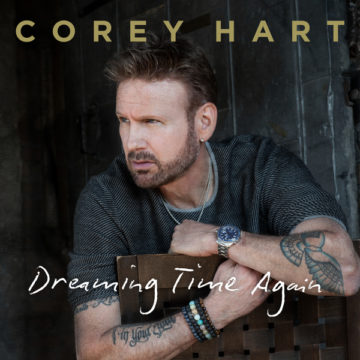 After a two-decade hiatus, pop icon Corey Hart returns with a new eight-song EP  titled Dreaming Time Again, along with a full blown Canadian tour in May and June, with dates to follow in Japan in July.

Known for such ‘80s hits as “Sunglasses At Night” and “Never Surrender,” the EP starts off on  a promising note with the rocking autobiographical title track “Dreaming Time Again” and is followed by the soothing ballad “Shawnee Girl,” and then moves into one of the highlights of the EP, the soft pop track “Another December,” that’s destined, without a doubt, to deservedly become a perennial Christmas Classic. Another highlight that follows is the country rocker “First Rodeo,” featuring a fine duet with Blue Rodeo’s Jim Cuddy.

However, it’s not all good news to report, as the aforementioned love song “Tonight” and the other tracks included in the EP — “Sonny’s Dream,” featuring Alan Doyle, and “Why Can’t I Feel Alive”– fail to reach the same high standards as the early tracks might suggest.

Gerry Young is President of Current Records and Management, and author of the 2011 biography Pop Goes The Weasel: Rock And Roll Off The Record, available at Indigo/Chapters, Barnes & Noble, and Amazon.com. He has recorded and managed Juno Award winning bands Martha And The Muffins and The Parachute Club among others.
RELATED ARTICLES
album reviewalbum reviewsrhino records
7.0