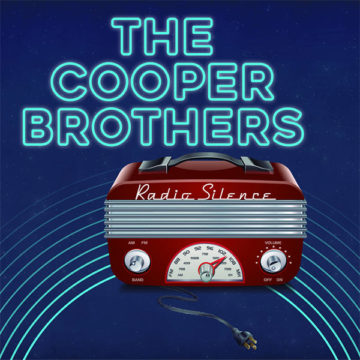 Legendary Canadian Country/Rock band The Cooper Brothers have returned with their eighth studio album, and perhaps one of their best, called Radio Silence.

Long known for their superb writing and vocal skills since their eponymous self-titled debut on the prestigious U.S. label Capricorn Records (Allman Brothers Band), songs like “The Dream Never Dies” and “Rock And Roll Cowboys”  both charted on Billboard’s Hot 100. It’s worth noting that “The Dream Never Dies” also won an ASCAP Award for being one of the most performed songs on U.S. radio the year it was released.

On Radio Silence, all of these formidable creative credentials are brought to bear, starting with the excellent R&B influenced opening title track. In many respects the album is a reflective and thoughtful one, and with outstanding melody-infused ballads like “End Of The Day,” “Follow Your Heart” and “Gone Are The Days,” The Cooper Brothers show their softer side, and it’s clear that they haven’t lost their deft musical and writing touch. All three songs are brilliant. They also display on the new CD their “shit-kicking” and humourous Country side, with “Government Town,” which mockingly celebrates their home town of Ottawa, and the sardonic “Mister One Percent.”

What Radio Silence proves are that The Cooper  Brothers are not only still going strong, but sounding as good as ever.