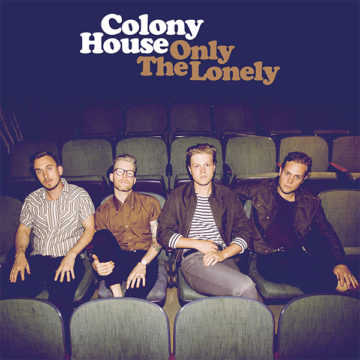 Colony House
Only The Lonely
RCA

With a brand new release for 2017, Colony House has already been claimed one of Entertainment Weekly’s “Bands That Will Rule in 2017”. Brothers Will and Caleb Chapman are the sons of the well-known Christian Pop musician, Steven Curtis Chapman. The brothers began writing together in high school and named their band after the apartment complex they lived in Nashville, TN. Eventually, they added guitarist Scott Mills and bassist Parke Cottre to the line-up, they signed with Descendant Records and started touring everywhere, with bands like Walk The Moon, Switchfoot, NEEDTOBREATHE, and Drew Holcomb. The four members put on a raucous, hard-hitting and action packed live show that shouldn’t be missed.

On Only The Lonely, Colony House once again delivered an assortment of anthemic choruses. They wrote cinematic songs, epic songs, and straight up hard-core Rock n’ Roll songs. Yet somewhere along the line, their immense talent has led them amiss — reaching for the ceiling but not quite sure where to hold on. Maybe they’ve just been striving to write music that will fit into every movie scene, and in doing so, lost sight of what they want for themselves.

The first single released, “You & I”, is my favorite song on the album. It is a funky rock song that sucks the listener in. In the bridge, the band drastically shifts the tempo into a hazy, washed out movement. They grow steadily through a long and memorable build into a surprise ending. The second single, “You Know It”, is also catchy, but it can’t figure out if it wants to be a Nashville hoedown, an atypical punk song, or sunshine-filled surf rock. Next up is the intense and heavy number, “3:20”. Its distorted guitars, John Bonham drums, and distant echoing vocals are just a few of its confusing ingredients. The song breaks off into cheesy riffs, a garage band sounding jam session, and a short section of ill-fitting “oh, oh, oh”.

“This Beautiful Life” is far and away the most church inspired of the bunch. Similar to “Glorious”, off the last album, this song is a slow and somber hymn. Colony House has been riding the maybe-they-are-a-Christian-rock-band line, just like U2 did back in the day. There are numerous biblical references in the lyrics and, well, we know who their father is. Religion aside, Only The Lonely seems to be an album that isn’t quite sure what it wants to be. The only certain thing is that they wanted to write songs that would sell.

This band is talented and can make amazing music. When I Was Younger was one of my favorite albums of 2014. The band was fresh, the songs were catchy, they grooved hard in the pocket, and hit even harder. They wrote melodic, catchy chants that rang in my head for days. The band had a sincerity that coursed through its veins and showed a tightly woven connection that only brotherly love can bring. Conversely, Only The Lonely has a lot going on. There are Rage Against the Machine riffs, weird Disneyland-theme-sounding transitions, and so many dramatic hits, stops, and starts that it begins to feel like a modern day Dream Theater or Rush. There is enough pop to feel like One Direction, and enough 90s rock to feel like Jane’s Addiction. It’s hard to hear the passion in this album that I heard in their debut release. Despite it’s valiant efforts, the band failed to write a song that really blows me out of the water, the way “Silhouettes” and “Waiting for My Time to Come” did. I wouldn’t fret too much though, because I know these guys have a ton of great stuff left in them. The second release is always the most difficult, and there’s plenty of potential and talent for their next work.

After majoring in business & entrepreneurship at UCSB and traveling the world, Andrew moved to Los Angeles to pursue music and not give up his love for surfing, hiking and yoga. He is also in a couple really cool, up and coming, indie-rock bands in LA - Mothlight & Lone Kodiak.
RELATED ARTICLES
album reviewsrca
9.0