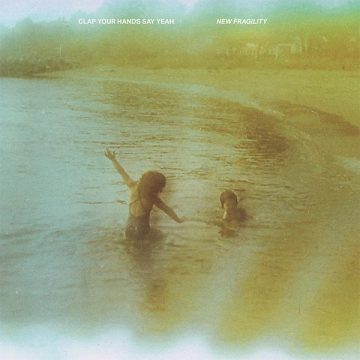 For a while now, we haven’t heard much about Clap Your Hand Say Yeah. There could be a few reasons for that. First of all, they’ve had no proper album release in three years now (they did come up with The Tourist album bonus tracks last year). But there could be two more substantial reasons.

To begin with, their brand of melodic rock that veers anywhere between Neutral Milk Hotel and The Go-Betweens is a bit tricky to categorize, for those that want their music neatly filed. Add to that the fact that the band, as the two above mentioned, also love to deal with some substantial, heavy themes. But, for those of us who are not always in for lighter, fluffier stuff, CYHSY are a pure joy to listen to. So, there’s no exception in any of the above respects for their latest outing, New Fragility.

It is the same melodic concoction, this time around coupled with some exquisite string arrangements. And again, the band mastermind Alec Ounsworth goes for more substantive material – the theme of the album is taken from the David Foster Wallace short story “Forever Overheard,” from the collection Brief Interviews With Hideous Men – ‘You have grown into a new fragility’.

Essentially, Ounsworth uses the band’s melodic vehicle to cover themes like depression, divorce and getting old. Quite heavy themes to say the least, but CYHSY and Ounsworth are able to cover them as if one was making one of those chocolate/chili desserts. It is sweet on one side, but burns your gut on the other.

Formerly a lot of things, including a journalist and a translator, currently a freelance writer living in The Netherlands.
RELATED ARTICLES
album reviewalbum reviewsclap your hands say yeah
8.0