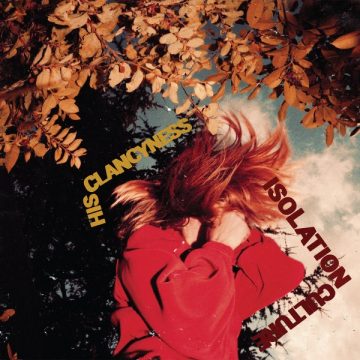 His Clancyness’s forthcoming art-pop LP Isolation Culture provides an uplifting effervescence and groovy weightlessness that leaves you head-bopping and smirking as you drive away from the sunset. Originally, a solo project of the group’s brainchild, Jonathan Clancy, the band has grown to include Jacopo Beta (drums), Nico Pasquini (bass) and Giulia Mazza (keys/synths). With the foursome writing together, this album has produced something no less than stellar.

Indie rock, dream pop, shoe gaze, however you’d like to coin it, His Clancyness evokes an understanding and love for all these worlds. Beta and Pasquini thump through radiant grooves that mesh seamlessly with Mazza’s bright and beautiful synths and Clancy’s fidgety guitars. The pop-inclined vocals and lo-fi instrumentation takes me to somewhere between Tame Impala’s “Lonerism” and David Bowie’s “Aladdin Sane” and I’m not quite sure how I get there.

Produced by Matthew Johnson (Hookworms) and Leeds & Stu Matthews (Anika, Portishead), this album combines a modern indie vibe with the spirit of 70’s rock and roll, leaving in the hum of old cassette tapes and the charm of vintage amps. The first track “Uranium,” starts with a growing buzz and a restless drum loop and steadily progresses though an ambient, The War On Drugs-esque groove. It is followed by the driving and bright “Watch Me Fall,” where Clancy completely changes his vocal structure and presence to meet the upbeat vibe. The record is romantic and sleazy all at once, familiar yet so unparalleled an unconventional. Whether its anti-pop or alt-rock, it makes me excited that there are bands hiding out somewhere making records that are true to what they believe in. His Clancyness has made a record that shows a sense of humor, respect for doing what you love and keeping faith in the unknown. The October 2016 release, Isolation Culture is a pleasant dream of ambient sonic textures that somehow find their way through a bit of danger and absorb the grit and glamour along the way.

After majoring in business & entrepreneurship at UCSB and traveling the world, Andrew moved to Los Angeles to pursue music and not give up his love for surfing, hiking and yoga. He is also in a couple really cool, up and coming, indie-rock bands in LA - Mothlight & Lone Kodiak.
RELATED ARTICLES
album reviewshand drawn dracula
9.0