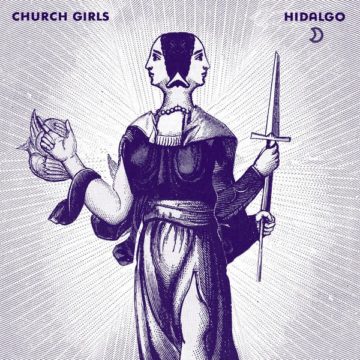 Formed in Philadelphia in 2014, Church Girls is singer/songwriter Mariel Beaumont’s way of filling the creative void in her fashion career. Teaming up with high school friend and guitarist Robert Dwyer, the two began collaborating and playing local bars with a rotating cast of band members.

Their self released debut album, Thousand Lives, produced by Brian McTear (Dr. Dog, Marissa Nadler), was released in 2016, and soon after, the band embarked on their first national tour.

Now, with a new lineup led by Beaumont and Dwyer, accompanied by Will Schwartz on bass and Zakary Iannitelli on drums, Church girls have released their new 2017 disc Hidalgo, produced by Erik Wofford (The Black Angels, Explosions In The Sky).

The 10-song album is at once a haunting and dreamy but still a kind of post punk record, highlighted throughout by Beaumont’s engaging vocals and lyrics, especially on songs like the first single “Better Off,” and other tracks including, “Breaking Bones,” “Pontificators” and “Rather Forget.” Also noteworthy is Dwyer’s excellent guitar work, especially on songs like “Glass” and the one instrumental on the album,“Mirror in Montreal.”

All in all, a thoroughly enjoyable listen.

Gerry Young is President of Current Records and Management, and author of the 2011 biography Pop Goes The Weasel: Rock And Roll Off The Record, available at Indigo/Chapters, Barnes & Noble, and Amazon.com. He has recorded and managed Juno Award winning bands Martha And The Muffins and The Parachute Club among others.
RELATED ARTICLES
album reviews
8.0