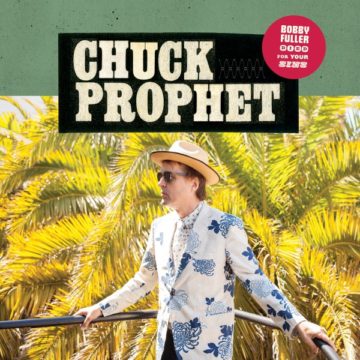 It looks like Chuck Prophet has done it again with another spectacular album to add to his collection. With his most recent album, Bobby Fuller Died For Your Sins, Prophet proves that 25 years after going solo, he continues to be one of the best singer/songwriters in the game. The album gives off a Tom Petty meets a heavy Dire Straits vibe which makes it easy to stomp your feet to the beat. Being recorded through analog, not digitally,  takes you back to the times of classic rock. This album was greatly inspired by the mysterious death of Bobby Fuller and the impact he had on rock and roll and it also includes nods to David Bowie and San Francisco security guard, Alex Nieto who the world sadly lost in 2016. Prophet pays tribute to the legends we lost with ’Bad Year for Rock and Roll’, touching on how the loss has taken a toll on the world and music. Harmonica, woodwinds and his wife Stephanie Finch on back up vocals, this album packs a punch that will leave you wanting more especially with its raw sound and soft rock taste. Using curious, angry, and sincere lyrics, Prophet has created a masterpiece that will raise questions and get people thinking now and much into the future. When the CD is done, you will be wondering why we don’t have more people like Chuck Prophet in the industry.

Here's what we think...
Spill Rating
Fan Rating
Rate Here
New Criteria
10
9.5
10
Total Spill Rating
9.5
Total Fan Rating
You have rated this
Album Reviews
album reviewsbad year for rock and rollbobby fuller died for your sinschuck prophetcoming out in codeopen up your heartyep roc
album reviews, bad year for rock and roll, bobby fuller died for your sins, chuck prophet, coming out in code, open up your heart, yep roc
About the Author
Jules Brown

The Spill Magazine is a Toronto-based online publication dedicated to covering the independent music scene with a strong focus on our thriving hometown talent. Our writers bring you up-to-date news, in-depth features on musicians and reviews for the latest CD releases. We also travel to the front lines for all local festivals including Canadian Music Week and North by Northeast. Don’t forget to check out our Facebook and Twitter pages for all daily Spill updates.
RELATED ARTICLES
album reviewsyep roc
7.0