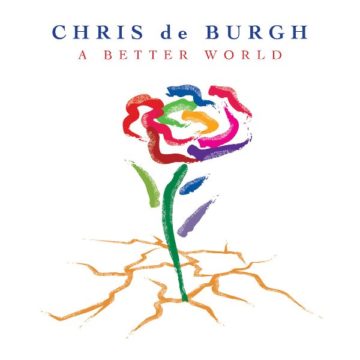 Chris de Burgh’s 22nd studio album, A Better World, arrived in stores on October 28th, and it ventures into familiar territory for de Burgh, that includes diverse styles, tempos, and instrumentation. A Better World seems to feed mostly off his 1986 mega-hit ballad “Lady In Red” from the album Into The Light. That single and album catapulted de Burgh into stratospheric sales of eight million for that particular single and, to date, over 50 million records sold worldwide. “Lady In Red” went to number one in 47 different countries, and with that history of chart success in mind, why would you change things up?

So it is with A Better World, which contains mostly melancholic ballads that de Burgh is fairly well known for. Fortunately, the record company has wisely chosen “Bethlehem” as the first single. It’s a first rate rocker in the tradition of one of his earliest top ten singles,“Don’t Pay The Ferryman.” The only other rocker on the album, “Chain of Command,” is also first rate, and one wishes that he would rock out more often. Nevertheless, “Lady in Red” fans should be thrilled with the new material, especially with the songs “Open Door,” Confession” and “Homeland.” There is one dud on the record, however, which is the final cut titled “Cry No More.” Too melancholic for my taste, but it should bring out the Kleenex for his fans. As with much of his past work, the lyrics speak about justice, quality of life and religion.

Chris de Burgh kicks off a world tour in support of A Better World in early 2017.