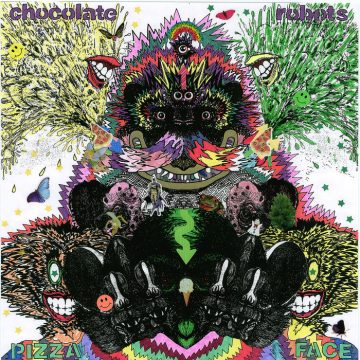 Close your eyes and sway. Simplistic and raw voices encumber summer youth. Even in the sullen songs, Chocolate Robots seem to have created a truly feel good album. With slightly cheesy (no pun intended) track names, their debut album PiZzA fAcE still rocks out the cool vibes. The Ontario-grown threesome lucked out by being able to work with the brilliant Fab Morettin from The Strokes, Thom Monahan (Vetiver), and Mark Lawson (Arcade Fire). Using all the small touches from such successful musicians, Chocolate Robots were able to capture the perfect aspects from all the named bands as well as their own budding talent.

Although there seems to be an overall theme of quirky love songs, each song has its own voice and the album is able to vocalize their range. Tracks like “Impossible Princess” and “xxcross the linexx” both have a more upbeat tempo and have been infused with youth and hype, while tracks like “Feeling Funny” and “Ratical Powers” take a darker approach and incorporate more of a rocky soulful feeling.

Chocolate Robots have really harnessed the reins of both incredibly happy, catchy music and the idea of the real passion that is put into music. They are able to utilize the sweet and sour voice of their vocalist, simplistic yet intriguing mixing abilities as well as the help from fellow musicians to create something to really rave about.