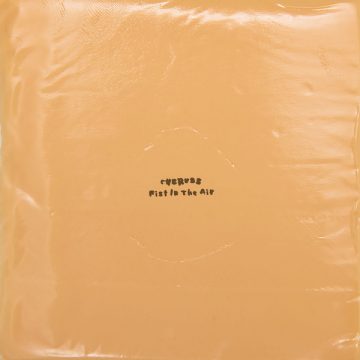 This five-track EP from Cherubs – their first offering since 2015’s 2 Ynfynyty, an album which broke two decades of silence with a high-hat destroying “hello, how are you” – is a carbonated bottle of the same vigorous noise-rock they produced in the early ‘90s.
Titular track “Fist In The Air” evokes the stretching, wailing guitars from My Bloody Valentine’s “Several Girls Galore,” while lyrics concerning juvenile Americanism, as visually represented by the single slice of plastic-wrapped cheese that adorns the vinyl sleeve, are presented sardonically and ironically. Mighty golden eagles, shopping malls and summer days; gleeful cynicism.

Second track, “Donkey Suite” is buried under fifteen thousand woolen blankets, with the threads of each twisting to the combined wills of distortion pedals and bent strings. The song fights against these layers much like, as its title indicates, a donkey or a pack-mule clambering up the mountainside. Asinine, crude and strangely fulsome.

“Red Carpet Blues” comes off like a truncated version of a 10-minute track. The core riff and dirt-chic sentiment is redolent of Queens of the Stone Age’s desert-rock purist phase.

After these original works come two remixes of the opener, “Fist In The Air.”

The first is from percussion-obsessed noise rockers Shit and Shine, whose 2015 LP Everybody’s A Fuckin’ Expert showed the group straying away from guitar rock and toward fizzling electronics. Their predilection for filthy, contagious beats is resurrected in this remix. The waves of guitar sound are reduced to gurgling howls, and over this velveteen texture, metalized vocals and clinking high hats etch out a coherent landscape. This collaboration is the standout moment of the EP (it’s worth noting that Shit and Shine founder Craig Clouse is Texan born – Cherubs’ home state).

Tim Harrington’s remix of “Fist In The Air,” which closes off the album, is both zappy and nutty – the perfect reprise for this frenetic EP.
What’s most impressive is how, after My Bloody Valentine set the precedent in 2013, Cherubs are starting a trend; both groups make “20 -year hiatus” look like a brilliant career move.

Fist In The Air isn’t a reinvention, but it takes hedge clippers to what remains of Cherubs’ weedy scrub. Not as manic as Boris, nor as mathy as Shellac, and all the better for it. Kraft said it so many times in ’77, and here’s that processed cheese again, this time as anti-culture ammo: “You Put Us On Top, America”