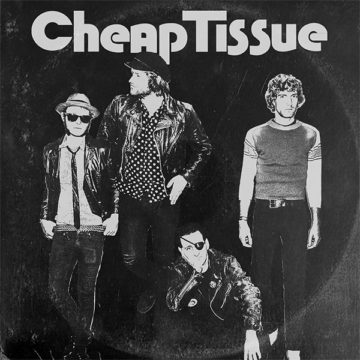 Cheap Tissue’s self-titled first album has all the grit, passion, and messy sonic energy of a classic punk band’s debut LP — think Bad Religion’s How Could Hell Be Any Worse but with more a more refined musical sound. Cheap Tissue is a thrilling ode to the ‘80s punk rock scene, with vocals that are just as distorted as the guitars. The LA band was formed by garage-punk wizards Andrew Taylor and Jesse Youngblood (both guitar/vocals), and the duo was soon joined by John Tyree (bass/vocals) and eye-patch sporting drummer Matthew Spizer. Cheap Tissue was recorded all in one adrenaline-fueled session and its spitfire blitzkrieg style echoes its frenzied pace of production. Despite its aggressive energy, this pulsing sonic wall of a CD doesn’t feel like an assault on the listener; instead, its prototypically punk chord progressions, choppy vocals, and shifting tempos are comfortingly familiar.

The music is an exhilarating celebration of raw, uncut rock and roll — while many punk bands pontificate on politics, Cheap Tissue is more interested in the spirit and nostalgia of DIY punk rock than in social justice, which is somehow refreshing. Cheap Tissue presents itself as a throbbing anthem for all old-school rockers who are proving that rock and roll is more than just a passing rebellious phase. The band somehow manages to channel a teenaged garage punk band, glorifying partying while spitting in the face of authority, while also maintaining the gravitas of washed-up punk rockers, sharing wisdom on battling drug addiction and wasted youth.

Many of the tracks hail back to hard-core punk classics, with a Black Flag meets Dead Kennedys feel in terms of production and vocals. “Apeman” has a catchy, jaunting riff reminiscent of ’90s Green Day, while “Feed the Children” is a fast-paced head-banging riot song that was made for moshing. “On the Corner” sounds more classic rock with a slower tempo but undeniable power. “New Promotion” sticks to its punk roots while integrating an amped-up ‘50s vibe, complete with “oohs”, modulated deep vocals evocative of Elvis, and a beat that makes you want to do the twist. Though the album is wholly unsurprising in style and content it doesn’t feel rehashed or trite – it is a revitalization of neo-punk emerging from a deep-rooted love for the classics, the kind of devotion to rock and roll that scares away any poseurs from the first riff.

Isabel is an English major at the University of Toronto, and spends most of her time reading books, listening to punk rock music, and writing for anyone and everyone willing to read it. Raised in Toronto, her somewhat eclectic music taste has been shaped by a healthy mixture of mosh pits and Mirvish musicals. She thinks live music is the highest form of entertainment.
RELATED ARTICLES
album reviewsapemancheap tissue
7.0