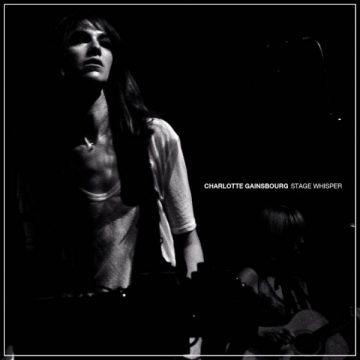 Charlotte Gainsbourg’s Stage Whisper, her third album (or fourth, depending if you include Charlotte Forever from her adolescence) is a continuation of her second album, IRM (2010). The first part of this 18-track album features seven unheard sessions from IRM, and the second part contains live tracks from her European tour last summer.

The “b-sides” from the Beck-produced IRM retains that Indie Dream-pop spookiness. The first track, “Terrible Angels,” is grungy Disco-pop that elegantly contrasts Charlotte’s soft vocals; this theme continues with “Paradisco,” which is more of a Dance track filled with bass beats and synthesizers. Beck’s influence is extremely evident in “All The Rain,” with the catchy beat and general strangeness of the track. “Out of Touch” is one of my favourite tracks, reminiscent of the Beatles with the groovy singing guitar and the good feelings it provokes. Gainsbourg excels with “Memoir,” an acoustic track that showcases the deep emotions her voice portrays and her dark lyrics.

The second disc contains the live performances of tracks from both of her previous studio albums: IRM and 5:55 (2006). Her cover of Bob Dylan’s “Just Like Heaven” is questionable, for not all would appreciate her whispering interpretation. If anything, the live tracks gives fans a chance to hear Gainsbourg live if they missed out before. It also proves that she can really sing (unlike many actors-turned-singers who must not be named). She has now also proved that she has inherited the diverse musical capabilities of her father, and perhaps has fully stepped out of his shadow. It will be interesting to see what she produces next, perhaps without Beck.

Raquel likes music a lot, especially indie music. This sometimes results in her writing about it. When she's not doing that, she is working at a tech startup in Vancouver. And when she's not doing that she's in school, learning about human resources. And in her spare time she sips wine while watching the west coast sunset.
RELATED ARTICLES
album reviewscharlotte gainsbourg
7.0