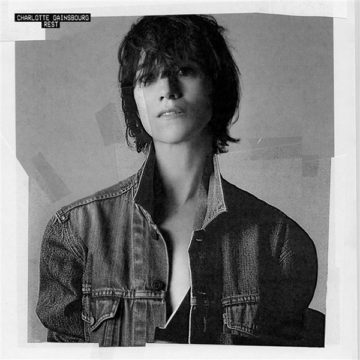 Known mainly as an actress, Charlotte Gainsbourg began her singing career at the age of 12, when she sang with her father, Serge Gainsbourg, on his 1983 single “Lemon Incest”. Since then she has released several well-received albums, starting with Charlotte Forever in 1986. Gainsbourg makes albums when she feels like it — or in this case when she has something to write about. Her fourth studio album and the first for which she wrote all the lyrics, Rest deals with some very painful issues, namely the death of Gainsbourg’s sister, photographer Kate Barry (the moving song, “Kate”) as well her own childhood fears and current insecurities. Although much of the album is in French, it does not distract, but perfectly complements the music and production.

Gainsbourg is known for her collaborations with very famous and talented musicians. When she does release an album, it is a big collaborative event, and this album is no different. Rest features Paul McCartney, Daft Punk’s Guy-Manuel de Homem-Christo, Owen Pallett and Connan Mockasin, just to name just a few. Gainsbourg also received coaching from Lars Von Trier so she could direct the video for the single “Rest”, which she co-wrote with Guy-Manuel de Homem-Christo.

Produced by SebastiAN (Frank Ocean), Rest certainly has the flavour of an 80s album. The keyboards and use of vocals meld well; Gainsbourg’s breathy, whispery vocals (especially in the opening track “Ring-A-Ring O’Roses”) are perfect; and the piano is reminiscent of Ultravox, circa 1986, or Alphaville. It is a brilliant way to begin the album and it certainly lays the groundwork for what is about to come.

One of the highlights of the album is Gainsbourg’s collaboration with Paul McCartney on the song “Songbird In A Cage”. McCartney, handling most of the instruments, an incredible melody and the most experimental sounds on the album, giving Gainsbourg a perfect soundtrack for her intense lyrics and vocals. Memorable lyrics included the line, “Songbird in a cage, Stars will be shining, Through the bars of steel” which she sings as McCartney accompanies. Gainsbourg’s influence can be heard in McCartney’s sound. His work here is more akin to his Fireman music than solo McCartney. It is a collaboration that works remarkable well.

Rest is a strong offering, but a few more surprises would be welcomed. A concept album in a very broad sense, the songs work better as a collective than as individual tracks. Gainsbourg is an excellent writer and vocalist, but she does not exhibit a great deal of variety, and the only real stand-out sound comes from McCartney’s involvement. That said, the production and packaging are top quality and it does play well as an album. Rest is welcome return for Gainsbourg and one can only hope that more music is on the way.

Word of advice, stick around for the hidden track at the end, it is yet another highlight and should not be missed.

Born and raised in Whitby, Aaron discovered music through his love of The Beatles. This led to a career in radio, writing for various publications, and ultimately a radio show about The Beatles (Beatles Universe), which ran for over four years. When not immersed in music, Aaron enjoys spending time with the loves of his life -- his wife Andrea, and daughters Emily and Linda (all of whom have an intense love of music too).
RELATED ARTICLES
album reviewsbecause musiccharlotte gainsbourg
7.0