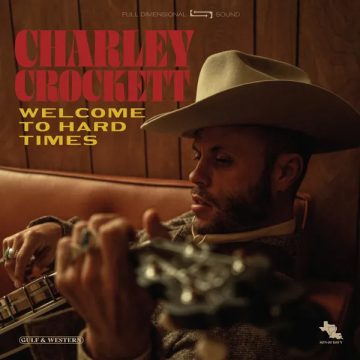 The battle between the fans of old classic country and of new country rages on. Arguments fly, but most of them won’t stick to the wall for more than a few seconds.

In comes Charley Crockett and his latest album, Welcome to Hard Times, his fourth in three years. He’s obviously got a point to prove, that the above mentioned debate is practically useless. Simply, Crockett seems to be single-handedly bringing that old country forward to current times. He is not only modernizing the old genre, but he’s taking the old themes and giving them that current touch. Go no further than the album title and the title song, the excellent “Fool Somebody Else”.

Crockett is not coming in riding on a blazing new, radically different saddle, he has just gently picked up the old and slowly placed it alongside the new, cherry- picking the best elements of both. By doing that, Crockett has come up with some eloquent, elegant country music that will probably survive quite longer that some of those currently popular trends in that genre. Slowly ridin’ towards a classic.

Formerly a lot of things, including a journalist and a translator, currently a freelance writer living in The Netherlands.
RELATED ARTICLES
album reviewalbum reviewsthirty tigers
7.0