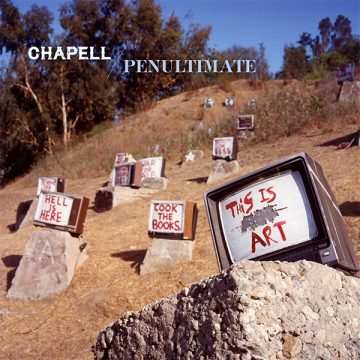 Making good pop music is probably one of the hardest things to do. You have all these prerequisite rules to abide by, coming up with a good and catchy melody, exercise almost perfect musicianship, and decide how long the song should be, among many other things.

Being able to come up with a creation as good as Lindsay Buckingham was able to do with Fleetwood Mac, or Michael Stipe in the latter-day R.E.M, requires not only exceptional talent but also a painstaking process of building each song piece by piece.

Whether Chapell will be able to reach such heights remains to be seen, after listening to Penultimate, his fourth album, one might think he may be on his way.

Chapell has played the trumpet from a young age, which is quite evident on such tracks here as “Time To Be Kind”. He has that ability to create a listenable melody in his songwriting, which he combines nicely with the world sounds he picked up during his travels, and which make songs like “The Radio” and “If You Like It” so easy on the ear.

He also manages to infuse his lyrics with depth that might come from his ‘daily job’ of advising tech companies on privacy issues, as he does on the opener “Ride” and “I Am Zuck” (yes, the Facebook one), making Penultimate ‘just’ a pure pop album. No more, no less, but certainly quite enough.

Formerly a lot of things, including a journalist and a translator, currently a freelance writer living in The Netherlands.
RELATED ARTICLES
album reviewalbum reviewsride
6.0