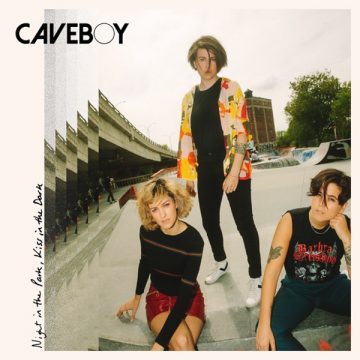 Caveboy
Night In The Park, Kiss In The Dark
Independent

Coming out of Montreal, one of last year’s most hyped Canadian buzz bands was the alt-pop three-woman outfit known as Caveboy, whose debut album Night In The Park, Kiss In The Dark, more than lives up to all the praise and accolades they have received so far.

The electro-pop trio is made up of Michelle Bensimon on lead vocals, guitar, and synth, Isabelle Banks on bass, synth, and backing vocals, and Lana Cooney on drums, percussion, and backing vocals. Produced by Derek Hoffmann (The Arkells, The Trews), the band had more than 40 original songs to choose from putting their first 10-song disc together, and by the infectious sound and high quality of the writing and production, the results speak for themselves.

Their first single “Landslide” certainly demonstrates the band’s more than credible alt-pop credentials, and gives the listener a good indication of where the band is musically coming from. Other previously released and highly praised singles on the new album include the bop-infused “I Wonder,” the haunting anthem “Silk For Gold,” and the mid-tempo jam “Hide Your Love.” But those aren’t the only gems on this record, as their song “Obsessed” certainly hits all the right notes, and sounds like a strong single to me, and other tracks such as “Up In Flames” and “I Guess I’ve Changed” don’t disappoint at all.

Gerry Young is President of Current Records and Management, and author of the 2011 biography Pop Goes The Weasel: Rock And Roll Off The Record, available at Indigo/Chapters, Barnes & Noble, and Amazon.com. He has recorded and managed Juno Award winning bands Martha And The Muffins and The Parachute Club among others.
RELATED ARTICLES
album reviewalbum reviewsnight in the park kiss in the dark
10