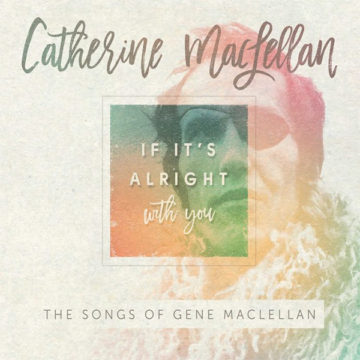 Catherine MacLellan
If It’s Alright With You: The Songs Of Gene MacLellan
True North Records

Folk singer/songwriter Catherine MacLellan’s latest release is a personal, reflective homage to the work of her late father, Gene MacLellan, a man whose songs have been performed by legendary musicians like Elvis Presley, Loretta Lynn, Joan Baez, and Chet Atkins.

The Juno-award winner lost her father in 1995 when she was a teenager. If It’s Alright With You provides a beautiful tribute, as she explores and interprets the legacy and meaning of Gene MacLellan’s work. The result is a thoughtful, sincere album that delves deep into a catalogue that has left a lasting imprint on the Canadian songbook.

Each song has been carefully selected with meaning and purpose laced in each track. As you listen, you can feel Catherine’s personality infusing the work. It is a challenge to take on a cover album, especially one of such delicate familiarity. An apt musician and lyricist in her own right, this is a task she succeeds in. Her performance of “Snowbird” feels subdued and intimate while remaining distinctive. It captures something different from Anne Murray’s, who found a signature song in “Snowbird” and chose a more upbeat delivery. Catherine breathes new life into these songs, showing that there are many ways they can be interpreted by singers and loved by listeners.

Catherine does not perform all of the songs on the album. Her decision to have her friend, PEI songwriter John Connolly sing lead on “The Call” came from her own preference: “It’s such a great song, but I never liked the “female” version of the lyrics, as they took out some of the rhyming scheme that makes the song so perfect.” It is this kind of consideration that makes the album resonate so well.

Catherine’s intimacy and care reflects the deeply personal blood ties of the album and her attention to detail shines through in these renditions. Versions of “Put Your Hand in the Hand”, “Bidin’ My Time”, and “Shilo Song” are among many tracks that accomplish this so well.

If It’s Alright With You: The Songs of Gene MacLellan comes out June 30th via True North Records.

Elizabeth is a Toronto via Caledon writer whose rural upbringing left a lasting love of anything with a banjo and an upright bass. She scours Toronto venues for both the musical talent and the beers on tap.
RELATED ARTICLES
album reviewstrue north records
10