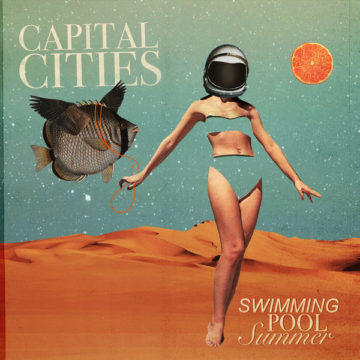 The new EP Swimming Pool Summer by the LA-based duo Capital Cities, comprised of Ryan Merchant and Sebu Simonian, delivers a hook-laden summer single on the title track, and is a worthy follow-up to their 2011 world-wide smash single “Safe and Sound.”

However, the other three tracks (along with a club remix of the title track) are about what you would expect from two former jingle writers whose defined existence is based on turning out LOTS of musical ideas, some of which are bound to miss the mark.

Curiously, one of the songs, “Girl Friday,” features Master MC and part time felon Rick Ross. Naturally, Ross can’t help himself and fast raps explicit lyrics on his lone vocal track that seem somewhat out of place for a relatively tame and commercial alt-pop duo. The other two songs — “Drop Everything” and “Drifting” — are pleasant enough examples of contemporary pop, but add nothing special to the musical form or this release.

Gerry Young is President of Current Records and Management, and author of the 2011 biography Pop Goes The Weasel: Rock And Roll Off The Record, available at Indigo/Chapters, Barnes & Noble, and Amazon.com. He has recorded and managed Juno Award winning bands Martha And The Muffins and The Parachute Club among others.
RELATED ARTICLES
album reviewsuniversal music
7.0