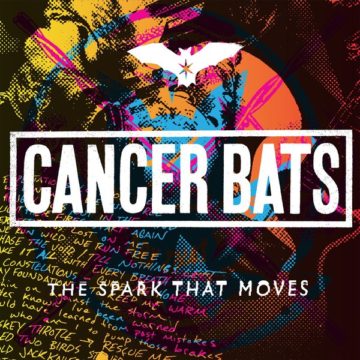 In celebration of 4/20 or in anticipation of Record Store Day, Cancer Bats have released their sixth album, The Spark That Moves. Released as a surprise, The Spark That Moves is the first ever independent release put out by Cancer Bats on their label, Bat Skull Records, in partnership with New Damage Records. While Cancer Bats are in the midst of touring in celebration of the tenth anniversary of their seminal sophomore record, Hail The Destroyer – with two back to back sold out performances at Toronto’s Lee’s Palace before heading off to Europe – the band has taken a massive leap forward beyond the excitement of an anniversary tour with The Spark That Moves, an unrelenting record that perfectly soundtracks the new era of Cancer Bats.

Like a sledgehammer of sludgy and distorted riffs to the side of the head, The Spark That Moves opens with “Gatekeeper”, a sonic assault that gives you no chance to buckle up before they pull you in. Their grimy and aggressive brand of punk is in full force as the band dives into “Brightest Days”, a song full of larger than life fills from drummer Mike Peters with Scott Middleton’s guitar taking inspiration from Zakk Wylde.

Despite being very well established as a modern hardcore outfit that seamlessly takes the best of punk and metal to make a highly distinctive sound, Cancer Bats shine brightest on The Spark That Moves when then stray from what is expected.  “Space And Time” seems to be one of those songs as it looks back to early hardcore music to deliver a driving verse and catchy chorus, all the while slowly building in momentum as growing more and more chaotic. The stark piano intro before heading into what is perhaps the heaviest track on the record on “Fear Will Kills Us All” also pans out as slightly experimental when one compares the soft and haunting tone of the piano with the ripping riffs and Liam Cormier’s throat wrenching vocals. The album also closes on a very strong note with the steady groove, dissonant Black Sabbath inspired riffs, and near progressive instrumental break of “Winterpeg”.

While Cancer Bats have spent the last few years pursuing their Black Sabbath cover routine – cleverly called Bat Sabbath – the band returns sounding refreshed with their first record in three years and their best album since Hail Destroyer. The Spark That Moves is a blistering eleven track album that pulls no punches. Cancer Bats sound tighter, focused, and as ambitious as ever as they clearly embark on what can very well grow to be one of the greatest highlights of their career.

A passion for music has always been a part of Gerrod’s life. As a young boy, he was raised on a steady diet of the music from The Chili Peppers, Aerosmith, The Stones, Prince, and others from his mum. Raised in the GTA, Gerrod continued to foster his love for music by attending a wide range of concerts and learning the drums. His unapologetic passion for music has no bounds and has spread to a wide variety of styles, whether it be the 90’s rock that sound tracked his teenage years, the jazz he studied in university, or his newfound love for hip-hop. He recently received his bachelors in music and education from York University and is passionate about writing and reviewing good (and less than good) music. Gerrod is also the drummer and songwriter for a Toronto based rock & roll band, One In The Chamber.
RELATED ARTICLES
album reviewscancer batsnew damage records
9.0