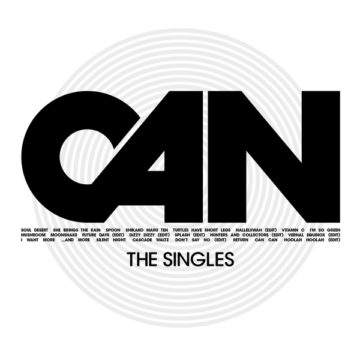 Can
The Singles
Mute Records

Can is, simply put, one of the most influential bands in music history. They formed in Germany in 1968 and the original line-up included Holger Czukay (bass), Irmin Schmidt (Keyboards), Michael Karoli (guitars); and Jaki Liebezit (drums). From 1968 until their breakup in 1979, they had a number of vocalists cycle through the band. Their music has been described as avant-garde, experimental, electronic, jazz and even new wave. If I was to list the artists influenced by this band, this article would go on for several pages. But, David Bowie, Ultravox, Orchestral Manoeuvres In the Dark, Kraftwerk are just a few. Take a listen to this collection and play a game of who was influenced by which song. I am sure David Byrne listened to “Turtles Have Short Legs” (released in 1971)  and based the early Talking Heads sound on that one song.

Mute records has very kindly assembled their singles into one collection. Can has always been known for their classic albums but they also released some pretty decent music on seven inch vinyl. At times, it gave them more permission to be even more experimental. Listen to “Vitamin C” (an ‘A’ side released in 1972).  Their use of voice, drums, and keyboards is nothing short of brilliant but more avant garde than pop. Did they really think this would chart?  United Artists Records certainly did and issued the single. Near impossible to find now, but here it is in all of its glory with it’s even more intriguing ‘B’ side, “I’m So Green”. While both songs can be found on the album from which they came (Ege Bamyasi), it is nice to hear them as a stand alone single.

Also included in the set is their Christmas single “Silent Night”. As with today, artists would release Christmas music in the 1970’s, which tended to be more singles than complete albums. Their version of “Silent Night” is eerie and catchy at the same time. It is not seasonal, but it is great.

The collection is organized, for the most part, in chronological order. Both ‘A’ and ‘B’ sides are here, so the listener can hear the singles as a whole. It makes for interesting listening. The collection also features singles from their reunion period and the songs stand up with their older catalog.  Listen to “I Want More” and compare it to everything else coming out in 1979/80. This song has not dated one bit and sounds surprisingly contemporary.  Brilliant.

This collection serves as  a great sampler and starting point for the uninitiated. Can, however is best represented by their albums. However, this collection does remind us of a complicated band who was defined by labels or styles.  It also serves as a reminder of a time when major labels took risks and signed and released this music.  Highly recommended.

Born and raised in Whitby, Aaron discovered music through his love of The Beatles. This led to a career in radio, writing for various publications, and ultimately a radio show about The Beatles (Beatles Universe), which ran for over four years. When not immersed in music, Aaron enjoys spending time with the loves of his life -- his wife Andrea, and daughters Emily and Linda (all of whom have an intense love of music too).
RELATED ARTICLES
album reviewsmute records
9.0