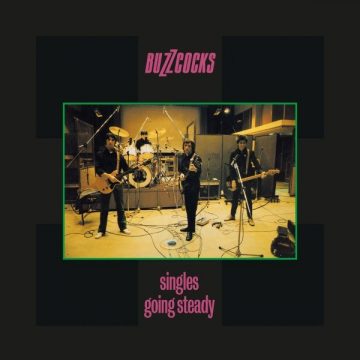 Singles Going Steady was originally released 40 years ago,the first Buzzcocks album released in North America. Basically it was a compilation of all of their singles, including the respective B-sides. It sold so well as an import in their native U.K. that it was officially released in that country in 1981, two years after the original release.

Of course Buzzcocks featured the remarkably talented Pete Shelley (vocals and guitar), and Steve Diggle (guitar and vocals). There were a series of members who quit and returned from 1977 to 2018 (including Howard Devoto). Sadly, Shelley passed away in 2018  but apparently Diggle is planning on keeping  Buzzcocks alive as a band.

I love this album. It is a perfect compilation. The songs are arranged chronologically and they sound timeless. All the singles are here and some of their best-known songs were their singles. For some of a certain age, this album was a blessing, as it was great  to have all the singles on one album. Of course I have kept all my seven inch singles (or 45s as we called them at the time) but it was always nice to have this collection.

Buzzcocks were punk and more. They wrote incredibly melodic songs that absolutely burst through the speakers. Look at the lengths of the songs, the vast majority are under three minutes. Perfect. Shelley’s plaintive voice set against some of the hardest instrumentation you will ever hear is almost too much at times.

The classics are all here. “Ever Fallen In Love (With Someone You Shouldn’t’ve)?”, “What Do I Get”, the funny “Orgasm Addict” and so many more. Not a weak second on the album. Domino has done a great job recreating the original release. The odd thing is that when the album was rereleased in 2001, EMI (the label that actually signed the band in 1977, after getting rid of The Sex Pistols), added eight songs, four other singles the band had released. Domino could have easily added a bonus album with those songs, and I am somewhat confused as to why they did not add the bonus material.

No matter, this is still a wonderful treat and a brilliant compilation. The late 1970s was an exciting time with the original  (and for some the only) punk movement. Buzzcocks managed to release some of the greatest and most influential records at that time. A great deal has been written about their influence and brilliance, this compilation does a great job in explaining what the fuss was all about.