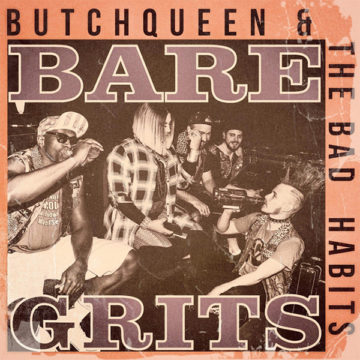 Punk music is typically created to inspire either change or chaos. Many punk rockers use the genre’s simple structure and accessibility to send progressive messages with the intent of making tomorrow better than today. Then there’s ButchQueen & the Bad Habits. Their latest EP, Bare Grits, is a collection of songs which is happy to lean on punk tropes, have attitude for attitudes sake, but does nothing to move along a scene which has become stagnant over the last decade.

Juvenile lyrics also afflict Bare Grits. The poetry reads like that of a rebellious middle schooler, attempting to cover topics they’ve yet to fully comprehend like sexuality and philosophy. The lyrics get so cringeworthy at points that the typically unfortunate muddy nature of dueling vocal tracks on “No Matter What They Say,” is actually appreciated. This track is a standout on the EP with its driving tempo and impressive vocal performance, which makes it much more of a shame that lousy writing weighs it down. The title track, “Bare Grits,” is by far the EP’s poetic low point. Its lyrics sound like they were read straight off of the inside of a bathroom stall; they won’t shock the listener but merely make them roll their eyes.

ButchQueen & the Bad Habits’s potential is apparent and we can only hope the band lives up to it. They have clearly all worked hard in learning their instruments, but somewhere along the way forgot to pursue the mastery of poetry. If they take the time to study some of the great lyricists, philosophers, and even punk rock legends, they could become a force to be reckoned with. However, many punks don’t fare well with criticism, and it is very possible that the band continues on the boneheaded path they’ve taken to with Bare Grits.