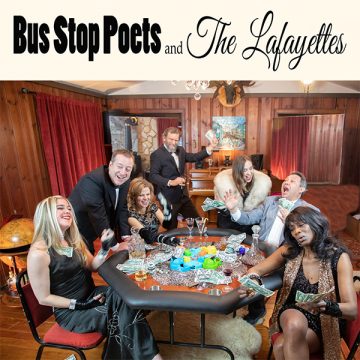 Bus Stop Poets
Leave It To The Kids
Independent

Combining Americana with the unabashed pop sounds of Fleetwod Mac actually sounds like a great combination. Anybody afraid of Fleetwood Mac? Or Americana for that matter? Based on Bust Stop Poets’ sophomore album Leave it to the Kids,the Detroit trio certainly are not – nor should they be!

John Mabilia (guitar, vocals), Cindee Lish (doubling her vocalist duties with The Lafayettes) and their rhythm section buddies John Edick and Randy Nelson, have sussed the essence of the Americana-tinged pop sound as the opening “Yo Won’t Miss Me” (and its more risqué closing version) amply show.

Bus Stop Poets just don’t stick to one trick formula here – they obviously have been influenced by the sound of Detroit legend Bob Seger (“Blow”) and the legendary Detroit rocker Mitch Ryder (the title track).There are also elements of Jeff Tweedy and Wilco (“Don’t Call Me Criminal”) and straightforward Americana (“Tractor Song”), and there are also some jazzy Motown vibes here as well (“Cool4U”).

They do it all without any unnecessary musical gimmickry, or by simply mimicking the sounds that inspired them. They exhibit flair and ease, and the music seems natural and unforced, as if they came from Detroit. You may substitute Leave it to the Kids if you don’t have any cool summer drinks around — or if there’s an abundance of them. It works both ways.

Formerly a lot of things, including a journalist and a translator, currently a freelance writer living in The Netherlands.
RELATED ARTICLES
album reviewalbum reviewsblow.
8.0