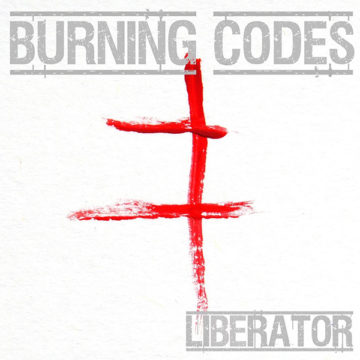 Burning Codes is really Belfast-based musician and artist, Paul Archer. Archer has released five albums under that name, and Liberator is album six. And, to be honest,  Liberator is the best Burning Codes album to date. From the opening “Loss Leader” until the last song “Releaser” (there is a remix of “So Alive” after “Releaser”), Archer grips the listener and does not let them go.

Archer has help, and on this album drummer Gary Must provides a consistent and steady beat throughout and he is ably assisted by bassist Karen Gadd. Two new guitarists have signed on as well, Lloyd Lord Fuzzman and Simon Bailey. Archer’s brother, Iain Archer (Jake Bugg, Snow Patrol) helps out with production, guitars, bass and keyboards on a couple of songs (“Loss Leader” and  “Embrace The Fear”, which also feature Jack Karnacz-Pollitt on drums).

But it is the songs that are the real star here. Archer is not happy about the shape of the world. Just listen to “Shit’s Getting Real”: “When reality is not our friends/I know it’s time, time to say shit’s getting real”

He says a great deal in a short span of time. What is interesting throughout the album, is that Archer is able to take global issues and make them individual and personal. In other words, Liberator does not comment on a macro level, but how the state of the world (politics, environment, war) impacts the person.

Musically, Archer keeps things interesting. The music is hard, until the end. He very cleverly ends the album with the reflective and painful “Releaser”. The song starts with a guitar and Archer telling us a tale, and the band comes in during the song to come to a glorious ending, both lyrically and musically. It is a brilliant way to end the end the album.

The remix “Feel So Alive” (here called “So Alive (Remix)”) is a nice addition but not essential. It could have been left for a single. It does not take away from the album, but “Releaser” is just so powerful that “So Alive (Remix)” feels somewhat unnecessary.

Liberator is a great album. It demonstrates growth and maturity of a talented artist. This is Archer’s first album in two years (his last being 2016’s Hope Is Our Lightening) and since that album he has developed into an insightful writer. Liberator is the kind of album that the more one listens to it, the more one takes away.

Born and raised in Whitby, Aaron discovered music through his love of The Beatles. This led to a career in radio, writing for various publications, and ultimately a radio show about The Beatles (Beatles Universe), which ran for over four years. When not immersed in music, Aaron enjoys spending time with the loves of his life -- his wife Andrea, and daughters Emily and Linda (all of whom have an intense love of music too).
RELATED ARTICLES
album reviewalbum reviewsbelfast
6.0