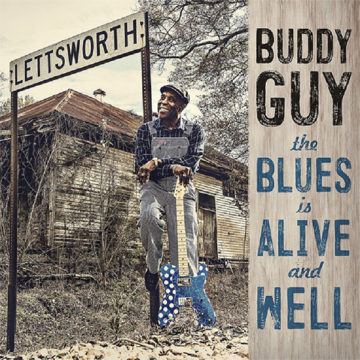 Buddy Guy
The Blues Is Alive And Well
Silvertone/RCA Records

Buddy Guy stands as one of the last true traditional blues legends of his time; an era that predated the rock ‘n’ roll explosion of the mid-1960s. Few remain, and even fewer are still releasing albums that remind us as to why they have enjoyed such a lengthy and illustrious career. The Blues Is Alive And Well is very much one of those albums. As a follow-up to his 2015 release, Born To Play Guitar, and his eighteenth solo studio album, The Blues Is Alive And Well features collaborations with Jeff Beck, Keith Richards, and Mick Jagger, and is certainly one of the best blues records to be released this year.

The Blues Is Alive And Well opens with the slow burning saunter of “A Few Good Years”, a song as remarkable for Guy’s warm vocal quality as it is for his rich and weaving lead lines on his strat – truly one of the greatest guitar tones I have heard on a new release in quite some time. Simply put, there are no bands around – with the exception for Gary Clark Jr. and his band – who can play such a slow-paced blues for nearly five minutes while keeping you on the edge of your seat for the song’s entire length. Similarly, the band proves to be just as tight on the upbeat “Guilty As Charged”, immediately showcasing that Guy may very well be leading one of the best blues bands around.

Guy’s songwriting shines on the album’s title track, a sparse song with accentuating horns and organs along with a unique structure and a sense of mystique and a rich air of improvisation from the whole band. “The Blues Is Alive And Well” is a brilliant track that strays from much of the blues structure and traditional style that runs deep through the veins of Guy and his work. “Whiskey For Sale” also stands out for its David Bowie “Fame” styled shuffle; funky and bound to get you moving and your jaw dropping with those fiery solos. That being said, when he plays the blues, he plays them damn well. Songs like “Bad Day”, “When My Day Comes”, and “End Of The Line” capture a traditional and classic sense of the blues in a manner that is beyond thrilling.

There are three tracks on The Blues Is Alive And Well that feature guest artists, all of which make the album that much more exciting. James Bay adds a warm tone when he takes lead vocals and follows Guy in a call and response manner on “Blue No More” while Mick Jagger unexpectedly steals the spotlight for his incredible harmonica playing on “You Did The Crime” – passing on vocal duties to shine as the underrated harp player that he is. The strongest of the collaborative tacks, however, is “Cognac” which features none other than Jeff Beck and Keith Richards on guitar. The song is a masterpiece as the three guitar players –distinguished by the guitar tones that each legend built their careers on – trade solos and rip through intertwining lead lines in a fashion that could only have been recorded live off the floor.

Front to back, The Blues Is Alive And Well is a flawless blues album and stands as one of the best records released this year. Buddy Guy shines as not only the exceptional guitarist he is known as, but also for his ability to stay true to the blues while still – yes, over half a century later – continuing to innovate the genre. The Blues Is Alive And Well is the kind of album that very well can influence and inspire a generation of musicians – blues, jazz, and rock – to push the boundaries and expectations of their art just as Buddy does, time and time again.

A passion for music has always been a part of Gerrod’s life. As a young boy, he was raised on a steady diet of the music from The Chili Peppers, Aerosmith, The Stones, Prince, and others from his mum. Raised in the GTA, Gerrod continued to foster his love for music by attending a wide range of concerts and learning the drums. His unapologetic passion for music has no bounds and has spread to a wide variety of styles, whether it be the 90’s rock that sound tracked his teenage years, the jazz he studied in university, or his newfound love for hip-hop. He recently received his bachelors in music and education from York University and is passionate about writing and reviewing good (and less than good) music. Gerrod is also the drummer and songwriter for a Toronto based rock & roll band, One In The Chamber.
RELATED ARTICLES
album reviewalbum reviewsmick jagger
9.0